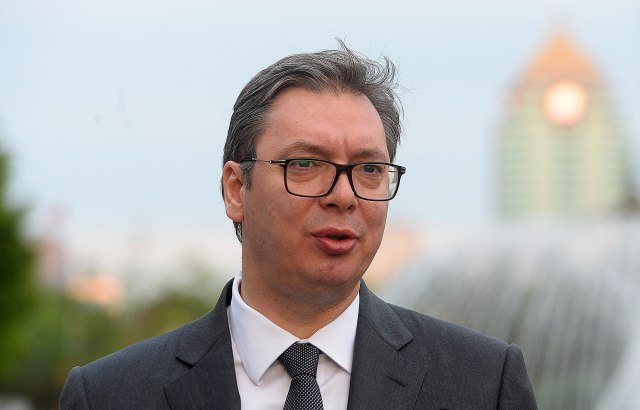 Vucic, when asked about the campaign in Bosnia-Herzegovina (BiH) media, deliberately launched ahead of the meeting in Berlin, noticed that this was an established media recipe, where something is first invented, and then "elaborated" in regional media, to the detriment of Serbia, to then state:

"There, we had been right, Vucic is doing everything to achieve this or that."

The media in BiH are citing the British Economist, that said behind Vucic's idea of demarcation (with Kosovo) stood his intention to unify Serbia and the Serb Republic (RS), the Serb entity in BiH.

He recalled that Albanian PM Edi Rama can be heard talking about about the unification of Albania and Kosovo and the creation of Greater Albania, "We are hearing from Albanian politicians from Pristina that there are no borders between Kosovo and Albania."

"Everyone is silent about it, they say it, I do not say anything, and no one writes about what they say, instead they write about what they make up at my expense... Then what are you supposed to do, how to react?" asked Vucic.

He added that EU foreign policy chief Federica Mogherini today had the chance to see him with the biggest smile to date - "because they pushed Serbia into a corner, a corner from where there is no way out."

"And now we have to defend ourselves and protect the country. We have nothing else to do. What, to defend ourselves from impossible lies?," Vucic said and then returned to the issue of Zvizdic's statement, to say he didn't see what he might explain to Zvizdic when it comes to his statement of being afraid of the redrawing of borders.

"BiH, as far as I know, does not recognize Kosovo, and I thank him for protecting the territorial integrity of Serbia. I am very pleased if he said that," Vucic concluded with irony, then turned to Albanian journalists and asked them:

"Did you hear that, you Albanians - Zvizdic stands for preserving Kosovo in Serbia? It's important that you know that, rather than me being the only one."

"It's not so," one of the Albanian journalists said, and the conversation followed this way:

Vucic: "It isn't, eh...?" So Zvizdic actually thinks that Serbia's borders should be redrawn, but not those of BiH?"

Vucic: "And then why correct it, if that's not what you said... He could have thought of one border, or that Kosovo is part of Serbia, so there is no border redrawing, and as far as I understand it, it is the official position of Bosnia-Herzegovina, so thank you Zvizdic for respecting the borders of Serbia. If he thought that there should be no border redrawing and that Kosovo was an independent state, it's a strange principle that it's possible to redraw the borders of Serbia without redrawing other borders..."

We, Vucic continued, are against redrawing borders, but we are ready to discuss all the solutions, and that is why, he said, he at one point spoke about the importance of a delimitation.

"Because there are borders that are recognized by the Spanish, others by Italians, others Germans, others by Russian... There are different boundaries in mind, and therefore, a solution must come with a compromise."

In addition to this political "clarification," Vucic also shared with Albanian journalists from Kosovo a few more remarks on "lighter" topics - such as language and sports.

Thus, at one point he asked one of them if they were recording his statement with their telephone, commented on the ability of journalistic adjustment, and on the fact the reporter "followed him" (on social media) in Serbian.

"Every last one of you from Kosovo speaks Serbian, well done. Only I never learned Albanian," said the president of Serbia, and when reporters remarked it was "not too late," he replied:

"There's time. If you think that's a bad thing, I don't, I regret not speaking Albanian. I'd find it easier to persuade you to revoke the taxes, to understand what's good for you and everyone else," said Vucic, with a smile.