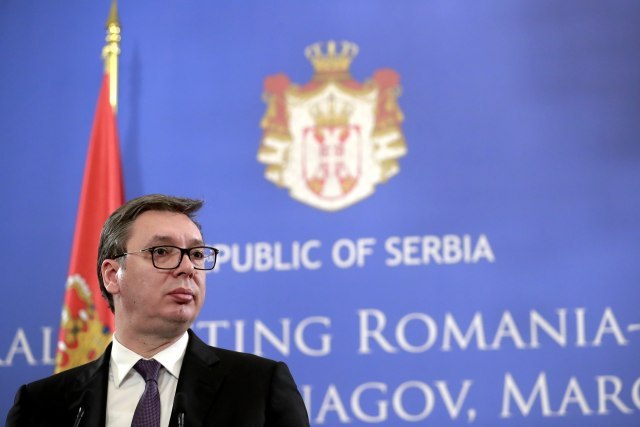 Later in the day a summit on the Western Balkans will be held there, organized by Germany and France, Anglela Merkel and Emmanuel Macron.

Vucic and Mogherini discussed the Belgrade-Pristina dialogue, where Mogherini is an intermediary, and the situation in the Western Balkans.

Vucic told Mogherini that Serbia was ready to, "as soon as tomorrow" to continue the dialogue - as soon that, is Pristina lifted their taxes on Serbian products.

"Whether that will happen is not in our hands," Vucic told reporters in Berlin.

He pointed out to Mogherini that it was about European values, and that the taxes were unsustainable.

He added that Mogherini also discussed bilateral issues such as Zelezara Smederevo and steel quotas.

"We will not allow our steelworks to be killed off due to different procedures," Vucic said.

He said that Serbia is committed to its European path and will continue to work on it.

He announced that he would later speak about the expectations from the afternoon summit on the West Berlin, but that he would not make a circus and in that was meet half way those who are seeking exclusivity and excitement.

We do not want conflicts, but preservation of stability and long-lasting peace, Vucic said, and pointed out that his expectations are not exaggerated, although, he said, they may surprise him.

His meeting with Mogherini lasted longer than planned.

Vucic says there are no big expectations from today's summit in Berlin, but that, unlike those who seek for sensationalism and exclusivity, Serbia does not want conflict, but preserving stability and lasting peace.

"I expect to exchange views in a serious and responsible manner," Vucic said and announced a broader comment after the summit.

"I could say a lot of things, but I will save that for tonight, I do not want to make any kind of political circus, I know that people are looking for some type of sensation, exclusivity, to may be create a new conflict, we do not want any conflicts, we want to preserve stability, long-term and long-lasting peace as the best, and the beginning of solving all those problems that hinder everything," Vucic told reporters in Berlin after meeting with Mogherini.

Whether we will succeed in this or not, my expectations are not too great, he says.

"I am not a great optimist, but I am not an optimist either by nature, it may be for the best. We may be surprised, maybe it will be something good, but I would not bet on it," concluded Vucic.

The meeting with European Commission representative Mogherini, the current Brussels dialogue facilitator, whose failure is precisely being put down to her, is an introduction to the afternoon summit, which will clearly be pressing Serbia now to give up any demand for a compromise solutions for Kosovo and Metohija, writes "Tanjug".

It is also clear that the Berlin summit, which has attracted great attention from the world's political and wider public, will be a "gloves-off meeting", where all actors involved in resolving the Kosovo problem will know exactly where they stand.

Vucic has already announced in advance that that he would, firstly to Mogherini, and then the participants of the summit, including the leaders of Germany and France, tell without hesitation what he thinks and expects from that gathering, but that the expectations of other participants, as far as both him and Serbia are concerned, are condemned to failure if everything is being reduced that Serbia recognizing Kosovo.

Pristina comes to the German capital with a list of demands and blackmail, determined to demonstrate the absence of any intention to reach agreement with Belgrade, except mutual recognition.

Aware of the intention of organizers of the meeting in Berlin to take over the solution of the Kosovo problem and bring it to an end in line with its position that Kosovo is independent and that there is no further negotiations there, President Vucic looks at Berlin as the place where the possible move forward might be to at least guarantee the preservation of stability and exclude the possibility of surprises in the shape of intrusions into the north of Kosovo and Metohija, using weapons.

Before the meeting in Berlin came the unofficial warning that Belgrade's and even Pristina's constructive attitude will be the condition for further European ingratiation.

The West Balkan six meeting with the French president and the German chancellor will take about two hours, after which a working dinner will follow.

Merkel and Macron will address the media before the summit begins.

Prime ministers of Albania, Bosnia-Herzegovina, Montenegro, Northern Macedonia, Serbia, representatives of the provisional authorities in Pristina, as well as the prime ministers of Croatia and Slovenia have been invited to the meeting.

The talks would then continue during a working dinner.