Serbian and Russian presidents Aleksandar Vucic and Vladimir Putin met on Friday in Beijing on the sidelines of China's Belt and Road Initiative forum. 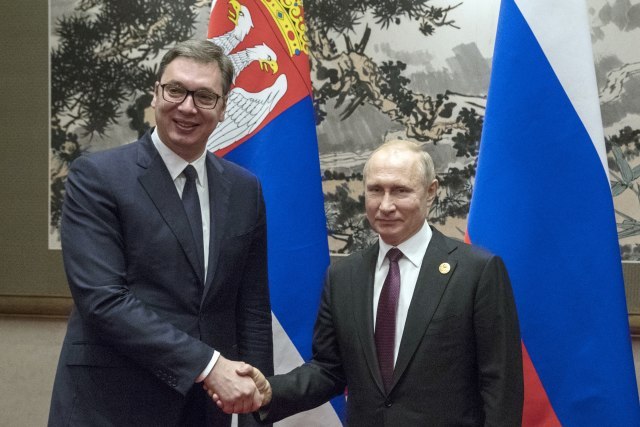 Putin spoke first, stressing right away that he was very pleased to be meeting with Vucic once again, the Kremlin announced on its website.

"I have warm recollections of the hospitality shown to me and my delegation during our visit to Belgrade on January 17. The talks we held then promoted our cooperation and gave a boost to bilateral ties. This is also reflected in the trade volume, which has been growing slowly but steadily - two percent last year," Putin said, in the part of the meeting that was open to the media.

He added that foreign ministers maintain constant political contacts, while relations in such a sensitive sphere as military and technical cooperation are also developing.

"I am glad to have this opportunity to meet with you on the sidelines of today's event and discuss bilateral relations and developments in the region," Putin said.

Vucic then spoke in Russian to respond: "Mr. President, respected Vladimir Vladimirovich, dear friend. I am very glad to be meeting with you today."

"I would like to say that your historical visit to Serbia was very important for the development of relations between Serbia and Russia. Your visit bore many fruit, but it was also a warm-hearted visit, because it spoke to the hearts of all Serbians," Vucic said.

He once again thanked Putin for the enormous support he shows to the development of the best political relations between our countries.

"I must also express my gratitude for supporting Serbia's territorial integrity and sovereignty (on the issue of Kosovo - ed.), because you support our country in all international organizations. As you know, this is very important for us," the Serbian president said.

"We feel a lot of pressure with regard to Kosovo. Once again, thank you very much for your unwavering support," Vucic said

"Constant growth in trade is our common success. We cooperate in many spheres," he continued. "And I believe that we should strengthen and promote our relations in energy, infrastructure, innovations and technological development."

Referring to Orthodox Easter that both Russians and Serbians celebrate this year on April 28 - Vucic concluded by saying: "It is Good Friday today. I wish you a happy and blessed Easter as well as success and prosperity to the brotherly people of Russia."

Earlier in the day, media reports said, citing unofficial sources, that Vucic informed Putin about the development of the situation in Kosovo and Metohija, and the direction of the effort to solve the Kosovo problem, while according to this, Putin confirmed that Moscow was carefully monitoring the situation, and would support Serbia.

Kosovo (officially: Kosovo and Metohija, KiM) is Serbia's southern province where ethnic Albanians 11 years ago unilaterally declared independence. Serbia continues to consider this a violation of its Constitution and territorial integrity, with Russia as its prominent ally among the countries that have not recognized the proclamation.