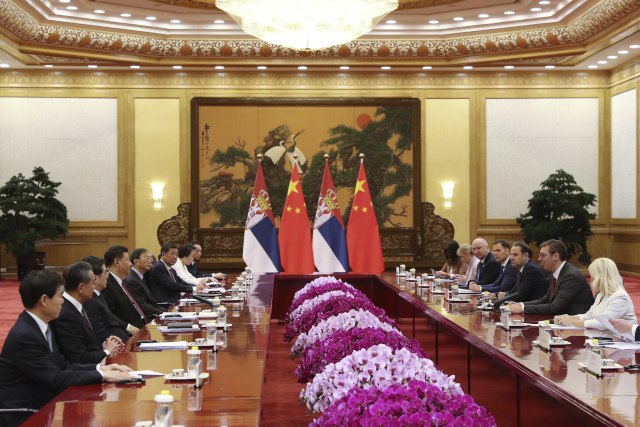 Vucic told reporters in Beijing that Xi had given his foreign minister the task of finding a date in his busy schedule to visit Serbia.

"He told me jokingly that he knows how important it is to me, to see my willingness to welcome him once again. That would be the crown of my work and my career, to bring President Xi to Serbia a second time, because I know that would bring a lot to our country," Vucic said and added: "I can say that we will be expecting him in Serbia soon."

Vucic also told journalists after his meeting with Xi in Beijing, where he is attending the Belt and Road forum, that Serbia had received exceptionally good treatment for a small country that it is. "With the Chinese, the rule is against embracing and kissing, I don't do it often anyway. President Xi repeatedly embraced (with me), which means that they respect Serbia and I am very happy and proud of that," said Vucic.

He added that Xi's tone was extremely friendly and that the Chinese leader, who carefully chooses each word, said that there are a handful of countries and friends in the world who speak and accept China's friendship in every place.

"Some countries that are accustomed to a stable order are trying to stop China and there is pressure not to cooperate too much with China. The point is, they (China) believe in our friendship," Vucic said.

Vucic says that he is a man who in a sense the ideologue of modern China.

"This is a man from whom I heard a lot about different topics, such as that Serbia should, being in an important strategic position and surrounded and pressured from all sides, protect its independence and develop the economy," Vucic said.

Earlier in the day, Xi received Vucic in the Great Hall of the People to discuss bilateral relations. This was their sixth meeting, and Vucic announced earlier the discussions would focus on economic cooperation between the two countries and on Kosovo and Metohija.

At the meeting, Vucic said Serbia and China were connected by a steely friendship.

"We owe much gratitude both to you and to PR China for everything you have done for Serbia," read a post on the Future of Serbia - Aleksandar Vucic Instagram account, which also included photos from the meeting.

Vucic invited Xi to visit Serbia to see the results of Sino-Serbian cooperation.

After the meeting, Vucic and Xi attended the signing of several bilateral agreements aimed at enhancing bilateral cooperation.