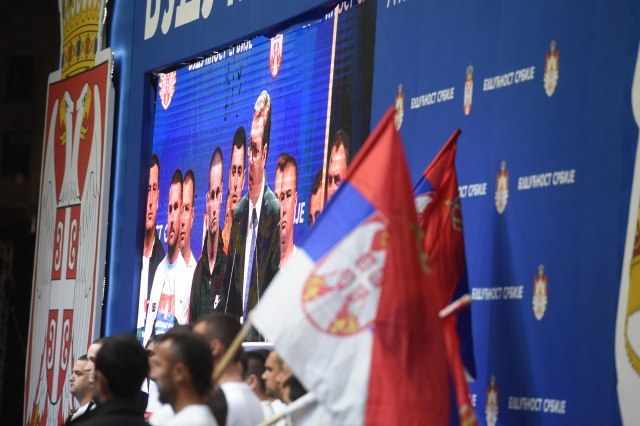 Uljarevic told Prva TV that the rating of Serbia's president and SNS leader has increased by six percent, adding that the protests of the opposition have led to the decline of the rating of the Alliance for Serbia (SzS).

Uljarevic said that the poll was conducted on Saturday, right after the "Future of Serbia" rally on Friday, on a sample of 1,000 citizens over 18 years of age and that in comparison with a survey done in early April, Vucic's rating rose by six percent and follows that of the ruling SNS.

"The SNS rating rose from 53.9 percent to 57.4 percent compared to the poll we conducted in early April. Their rating is fairly stable, for almost the entire half of 2018 it was about 55 percent," Uljarevic told TV Prva.

Asked what influenced the improved rating of the SNS and of Vucic, he said that tensions in society are being motivated by both sides and that the opposition protests affected the motivation of SNS voters to choose to vote.

"The behavior of the electorate at this moment seems to be pre-election-like, as if we are close to elections. That special rhetoric of the president and the 'The Future of Serbia' campaign influence the motivation of SNS voters," he explained.

Asked how opposition protests affected their rating, he said that the SzS rating rose last year and went up to 15 percent, but that it began to decline at the beginning of this year and is not at 10 to 12 percent.

He said one reason was the radicalization of the protest, but also that the Movement of Free Citizens has a new leader, Sergej Trifunovic, who started with eight percent support.

"These votes are like a system of communicating vessels, if ratings go up for one side, they declines for others, and vice versa. People in that bloc are always fighting for the same piece of voter pie. Trifunovic started with eight percent, now he is at five, six percent," Uljarevic explained.

Asked about the party of Dragan Djilas, he said it was on the edge of (five percent) threshold that would secure it seats in the National Assembly - as are the Radicals, while the Dveri Movement has three to four percent, the Democrats are at three, and the People's Party of Vuk Jeremic at two percent.

Asked whether early parliamentary elections would happen in June or next spring, he said that the numbers are not the most important factor in deciding to call an election, but the situation in society and the opportunity to change something - or to verify a decision and get citizens' support for some idea or policy.

"Going to elections is worth it if you need to solve an important state problem, if something happens around Kosovo, if we have a new opportunity to reach an agreement so that it is verified in elections, to let citizens declare themselves - then it would be a reason to goes to the polls," Uljarevic concluded.