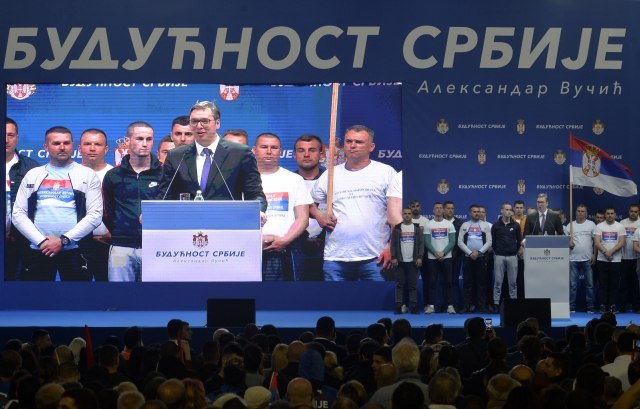 The gathering was organized as part of President Aleksandar Vucic's "Future of Serbia" campaign.

A large stage was installed in front of the parliament building, along with three large LED displays. Nikole Pasica Square was closed for traffic, as well as parts of Decanska and Vlajkoviceva streets.

Szijjarto addressed the gathering speaking excellent Serbian, and observed that relations between the two countries have progressed to such a degree recently that a Hungarian government minister is now a guest in a campaign organized by Serbia's ruling party.

According to reports, about 150,000 people gathered for the rally in Belgrade.

President's Secretary General Nikola Selakovic told Prva TV earlier in the day that participants would arrive from across Serbia, but also from the region: Montenegro, Croatia, and Bosnia-Herzegovina.

Buses from Kosovo and Metohija brought about 7,000 Serbs from the southern Serbian province to the rally in the capital.

Scroll down for more photos