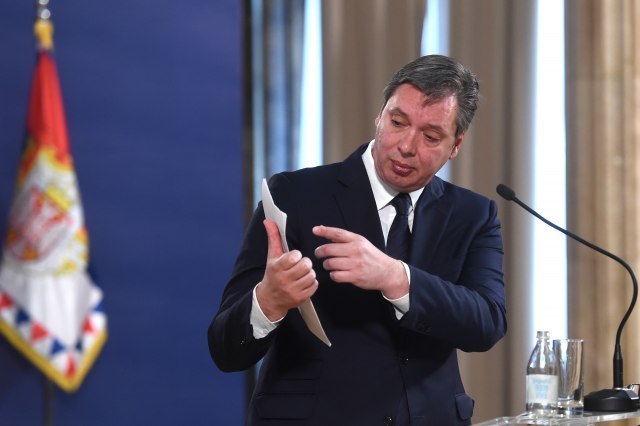 Therefore, nothing of the kind will happen in Berlin, Vucic told a news conference on Thursday. The meeting will take place at the end of April, dedicated to Kosovo and organized by Germany and France.

"Shared sovereignty is always something that is a problematic legal category, while the so-called dual sovereignty - I don't know what that means. But nobody told me that, nobody offered us that, and something like that will not happen in Berlin," he said.

"That invented by an Albanian (language) newspaper," he continued, "And then we yammer on about it for 15 days. What can you do. That business will come to nothing," Vucic said.

Albanians must know that without compromise with Serbia they will never have anything, said the president.

"The the international community, too, Germany, the United States and France must know that without compromise, pressure does not help," Vucic told reporters.

The president said that a difficult period is ahead of our country, though not decisive, and that he expects more pressure.

He added that he himself is exposed to demands that Belgrade "do something, so that Albanians would revoke taxes (on products from central Serbia)" - and that this is taking place on a daily basis.

The president added that Serbia will fight using civilized methods, that Belgrade ha waited six months without introducing reciprocal measure after Pristina introduced its taxes, but that Belgrade cannot wait forever without a response.

"I will also tell that to Chancellor Angela Merkel and French President Emmanuel Macron," Vucic said.