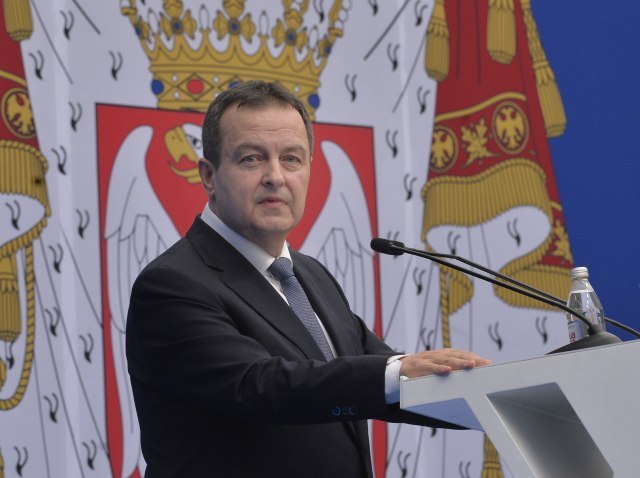 Dacic told Pink TV on Thursday that he does not expect any pressure regarding the adoption of a framework on the content of a future agreement with Pristina - "but it will definitely be a culmination of pressure on Serbia to continue the dialogue regardless of whether or not Pristina abolishes taxes (on products from central Serbia)."

He said the meeting in Berlin at the end of the month, organized by German Chancellor Angela Merkel and French President Emmanuel Macron, who invited leaders of the Western Balkans - has caused controversy in the European Union as it was set up without the knowledge of Brussels, EU foreign policy chief Federica Mogherini, other EU member-states.

Dacic said that Vucic is under extraordinary pressure to, among other things, stop Belgrade's campaign for withdrawals of Kosovo recognitions. According to the minister, Vucic's meetings in Beijing on April 25 and 26 are very important because he will meet with Chinese President Xi Jinping, whose country is an important and strong Serbian ally, and also with Russian leader Vladimir Putin.

Dacic added that disinformation is often placed abroad that Russia and Serbia have different views on the issue of Kosovo and Metohija, and stressed that this is not true. Dacic, who was in Moscow on Wednesday, said that Foreign Minister Sergei Lavrov reiterated that Russia will support any solution that Serbia considers to be in its interest.

"Lavrov told me that the (Vucic-Putin) meeting will be on April 26 at 15:45 hours, which shows that they are paying great attention to this meeting," Dacic said.

The minister also pointed out that Serbia's internal stability in Serbia is important because of Belgrade's negotiating position on Kosovo and added that there is an image is being created of political uncertainty, which, it assessed, undermines the position of Belgrade in the negotiation process with Pristina.

"Negative images coming from Belgrade have become a recurrent theme. An image is being created as if here is a dilemma in Serbia about who has support of citizens and who doesn't, thus undermining Serbia's position in the negotiation process," Dacic said.

However, he added that Serbia's position is much different and better than five or six years ago, "when nobody asked us anything - instead we just did what others planned."