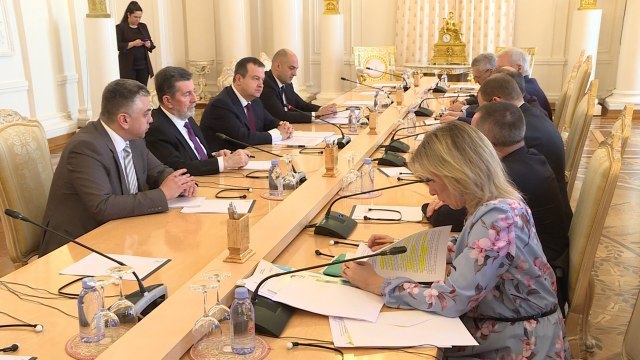 The meeting later this month will bring together top representatives of Belgrade and Pristina.

Dacic said that the reports are just assumptions and that he was unaware of such a solution existing anywhere in the world.

"This is what Merkel will supposedly propose: soc-called dual sovereignty in the north of Kosovo - both of Kosovo and of Serbia. But these are all assumptions and I don't know that this solution exists anywhere in the world, except on that paper," Dacic said.

Dacic made the comments during a joint news conference in Moscow with Russian Foreign Minister Sergei Lavrov, who remarked that when they were recognizing Kosovo's illegally declared independence, who who did that "never mentioned dual sovereignty."

"But I repeat, it is up to our Serbian friends to make a decision. Regarding the pressure on Serbia and the demands that it recognizes Kosovo, this it will continue. Above all, the US and the current administration are busy trying to achieve as much foreign policy successes in the short time before the next election," Lavrov said.

Previously Pristina-based newspaper Gazeta Express said that France and Germany would present a proposal that would "somewhat meet Belgrade's demands."

The report said that this plan does not envisage "partition of territory."

"There is talk of dual sovereignty, Kosovo would preserve territorial integrity, but Serbia would enjoy some sovereignty over Kosovo Serbs and Serbian churches," a source said.