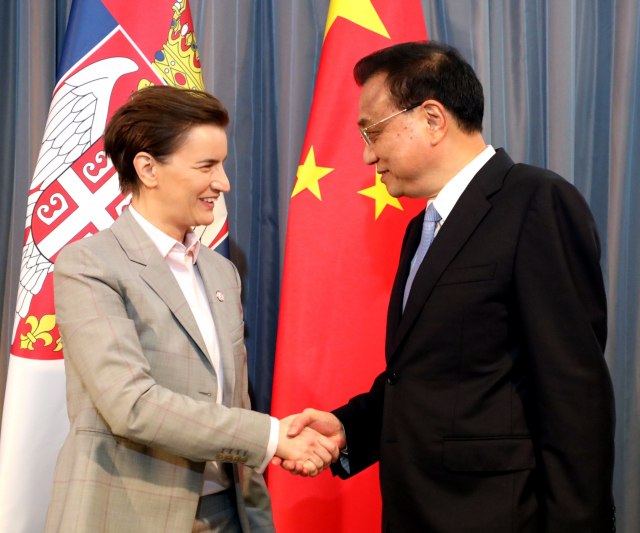 The meeting took place in Croatia during the gathering of the heads of government of the Central and Eastern European Countries and China (16+1).

Brnabic said that bilateral economic cooperation between Serbia and Chin, "which is getting stronger and more intense month in month out," was discussed, the government announced.

Brnabic told the press after the meeting with Keqiang that total Chinese investments in the projects that have already been implemented, which are in progress and are being planned, have reached EUR 10 billion.

At this moment, negotiations are under way with Linglong on the takeover of Ikarbus, the Prime Minister said and added that there are more and more Chinese investment that create a large number of jobs.

When it comes to infrastructure projects, Brnabic singled out the three most important ones for Serbia - the modernization of the Belgrade-Budapest railway, which goes very good on our part, and it is expected that the construction of the Novi Sad-Hungarian border section start next year.

Corridor 11, where preparatory works for the continuation of the Preljina-Pozega section began, is also of great importance, and it is expected that President of the Republic of Serbia Aleksandar Vucic will sign an agreement for the Pozega-Boljare section in China.

The prime minister stated that she thanked the Chinese Premier for his country’s political support to Serbia, first of all in the matter of preserving territorial integrity and the position of China regarding the holding of the session of the UN Security Council and its stance at that session.

Speaking about the problems in Belgrade-Pristina relations, she pointed out that at the meeting with Li, cooperation, assistance and support were confirmed.

The position of China is that the admission of the so-called "Republic of Kosovo" to any additional international organizations, such as INTERPOL, is absolutely unacceptable. We will continue to work together and continue to keep the interest of Serbia as our friends do, Brnabic said.

The prime minister added that she does not have great expectations from a meeting dedicated to Kosovo and Metohija in Berlin on 29 April, but that Serbia will show there too that it is a reliable, stable and predictable partner.