"Everyone using force will be detained that instant"

Aleksandar Vucic repeatedly pointed out during his TV Pink interview that violence will no longer be allowed. 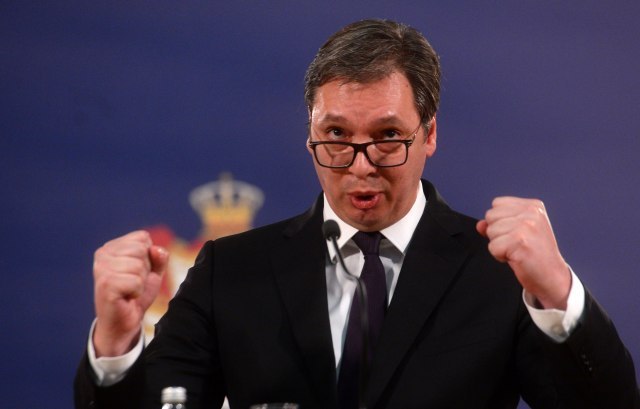 All those who resort to violence will be detained the same second, the president added.

Vucic told the citizens that they should not be afraid of anyone, "since violence will not be allowed anywhere."

He was speaking after opposition protesters on Saturday, led by Alliance for Serbia leaders Bosko Obradovic and Dragan Djilas, broke into the Serbia's public broadcaster (RTS) building, demanding a broadcast of their live public address. The incident ended with the police removing all participants in this protest from the building without using force.

On Sunday, a small group of protesters was also in front of the Presidency building, where they shouted insults against Vucic.

Asked to comment by a TV Pink interviewer on "the people who are against him and advise Macedonian Prime Minister Zoran Zaev and others" Vucic said that when it comes to his job he only asks whether it is done well or badly, whether they work in the interests of the country or not, as well as for and against their country.

"There are no personal relationships. They don't have any particular personal hatred. They only have frustrations," Vucic underlined.

He recalled that four years ago, Djordje Vukadinovic said that the fall of Vucic had begun because the opposition had won two villages, and now that his party, the ruling SNS, won, they didn't even publish this news.

"They cannot win anywhere, not in a single election," he underlined.

He pointed out that they know they cannot gain the trust of the people and therefore have such kind of frustration.

Vucic stressed that a coalition of tycoons has been formed against him, while "the media machine has been started."

As for the protest in front of the presidency on Sunday, he said it upset and scared some employees.

Vucic said that the ongoing weekly protests contain nothing that reminiscent of October 5, 2000 (when Slobodan Milosevic was removed from power) because people then thought they were participating in order to defend the will of the people, while those who are protesting today are struggling against popular will.

He added that "today they gathered and demonstrated supposedly a big protest - and gathered 1,023 people."