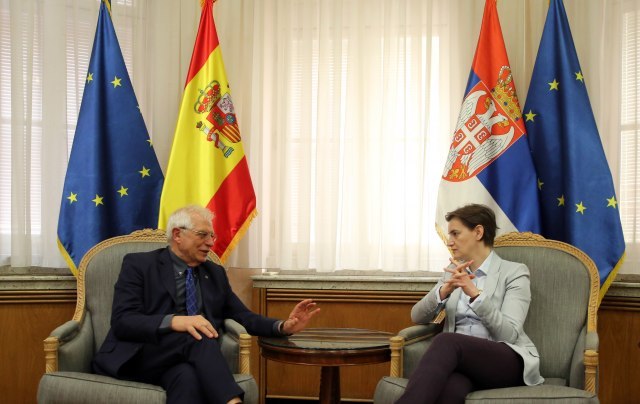 According to the Serbian government, they spoke about development of bilateral cooperation and the intensification of economic relations between the two countries.

Brnabic expressed her gratitude to Spain for the strong support it provides for Serbia on the European path, and stressed that our country greatly appreciates Spain's principled position on Kosovo's unilaterally declared independence, as well as the consistent commitment to respect international law.

Borrell has once again confirmed that Spain "will not change its policy towards Serbia when it comes to Kosovo and Metohija."

Spain is one of five EU member-states that do not recognize Kosovo.

According to the Serbian government, the two officials "concluded that bilateral relations of the two countries are very good, as well as that there is plenty of room for improvement of economic cooperation and creation of conditions for greater trade exchange and new investments in Serbia," while Brnabic "assessed that the introduction of direct flights from Belgrade to Madrid and Barcelona will be a good impetus for the faster development of the economic relations of the two countries."

While in Belgrade today, Borrell was also received by President Aleksandar Vucic, and his Serbian counterpart, Ivica Dacic.

Dacic expressed his gratitude to Spain for its strong support to the territorial integrity and sovereignty of Serbia, a matter of the greatest national interest for our country.

Speaking at a joint press conference with Borrell, Dacic said that Serbia provides firm support to the territorial integrity of that country and opposes attempts at internationalizing the Catalan issue.

He underlined that Serbia did not allow the opening of a diplomatic office of Catalonia in Serbia, which would have a notion of statehood, but that such an office has been opened in Zagreb.

Support to the territorial integrity is a matter of the highest national interest for Serbia, and it is very important that Spain, as a large EU member state, has not recognized the unilaterally declared independence of Kosovo, Serbia's First Deputy Prime Minister said.

According to Dacic, Serbia and Spain are traditionally friendly countries, which have good relations and cooperation at all levels, with the trend of improving regular relations.

Foreign trade between Serbia and Spain is between EUR 450 million and EUR 500 million, Dacic said, adding that the exchange is higher than it used to be, but that it is relatively small compared to the opportunities that exist.

That is why Serbia impatiently awaits an economic forum in Madrid scheduled for the second half of this year, which will be used for further improvement of economic relations.

The minister also welcomed the decision to introduce regular Belgrade-Madrid and Belgrade-Barcelona flights, pointing out that Serbia and Spain are present together in multilateral peacekeeping operations, such as those in Lebanon, where 117 Serbian Army troops are part of the Spanish battalion.

Borrell underlined that Spain's position on the non-recognition of the unilaterally proclaimed independence of Kosovo is clear and that Madrid believes that only through dialogue can a permanent solution on this issue be found.

He stated that Spain is committed to peace in the Balkans and that it believes in dialogue as the best way to overcome the existing problems in the region.