Serbia to hold military parade on anniversary of NATO attack

Aleksandar Vucic says the 20th anniversary of the start of NATO's bombing will be marked with a special religious prayer, moleban, and a military parade. 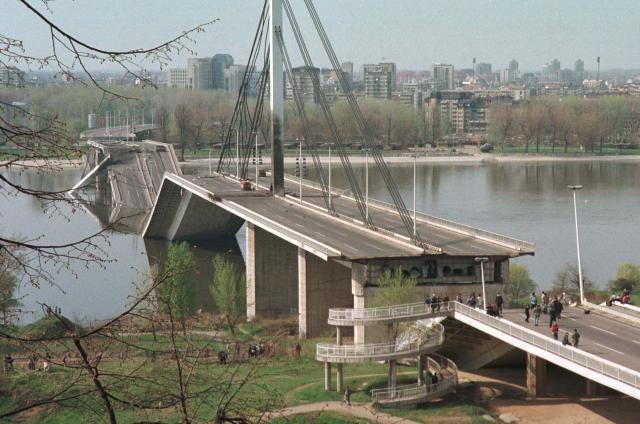 A bridge in Novi Sad destroyed by NATO in 1999 (Tanjug, file)

"It's been 20 years since NATO's aggression on one sovereign country, which was not guided only by bombs from the air, it was done almost by any means - political, media," the president told RTS on Tuesday.

He pointed out that it was not only a matter "bombing" - because that was just a technical term. Instead what happened was an aggression on a sovereign country, which did not deserve it any way, but suffered terrible sacrifices.

"Serbia, despite the fact that it was not conducting the smartest and the wisest of policies, did nothing to deserve that and is not responsible for NATO's aggression," while the terrible suffering the country faced - "from (killed toddlers) Milica and Sara, to many soldiers and policemen who died only for protecting the law."

"We will (on March 24), in a dignified manner, in the evening ,be in Nis, which was attacked several times, exactly on the anniversary, to address the citizens. It will be a state manifestation, with a moleban that will be led by Patriarch Irinej and the bishops of the Serbian Church," he stressed.

He added that before that, a military parade will be organized in Nis, where citizens will be able to see 1,500 special purpose soldiers, equipped according to the latest standards, eight to ten MiG-29s, and 19 new helicopters.

"Serbia is seriously strengthening, its security, its safety. That is the foundation of further consolidation of our state," Vucic said, adding that the program of building new housing for members of the military, the police, and the BIA will continue, as well as work on increasing their wages.

The president called on the residents of Nis, and those living in the south and south-east of Serbia, to "come and see their army" on the day.