The session of the Serbian Council for National Security, convened by President Aleksandar Vucic, started a little after 08:30 hours CET on Friday in Belgrade. 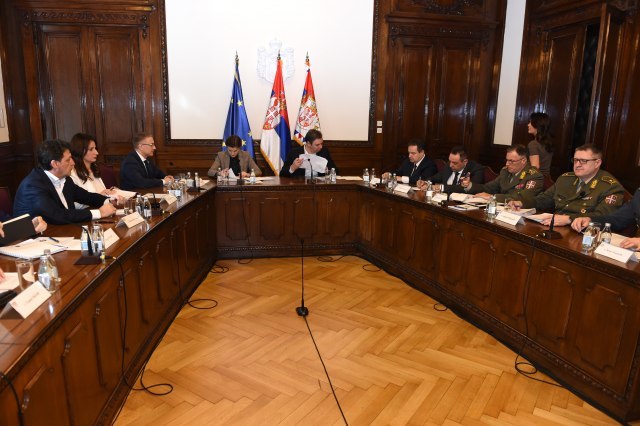 The president of an association gathering families of those killed or kidnapped in Kosovo and Metohija, Simo Spasic, placed a banner this morning near the Presidency, where the meeting is being held, urging the Serbian authorities to abandon the dialogue "with KLA ('Kosovo Liberation Army') leaders."

The Kosovo Assembly previously adopted its platform for negotiations with Belgrade, with Prime Minister Ramush Haradinaj's message that "the borders of Kosovo are untouchable" - meaning, "preserving Kosovo as it was on February 17, 2008 (the date of unilateral declaration of independence made by ethnic Albanians, that Serbia rejects as a violation of its territorial integrity - ed.)".

For Belgrade, this document, from the moment when its first version surfaced, was a sign that Pristina does not actually want a compromise, nor dialogue, or any kind of agreement - except simply Serbia's recognition, and within the borders that it has set for itself, within the territory of Serbia.

Vucic recently spoke at the Munich Security Forum to say that what the Kosovo Albanians delivered to the Assembly as a platform for continuing the dialogue with Belgrade was in fact a platform against dialogue.

The previous session of the Serbian Council for National Security was held at the end of November last year, when Pristina increased by 100 percent taxes on goods from central Serbia.

Kosovo and Metohija Office Director Marko Djuric said on Thursday that Pristina's adoption of a platform for the dialogue with Serbia in the Kosovo Assembly was "a clear message to the entire world that this is the end of the dialogue."

"The adoption of the platform which says that the only possible outcome of the dialogue is the recognition of so-called independent Kosovo" and which fails "to mention even in a single sentence the rights of Serbs and other non-Albanians in Kosovo and Metohija," shows Pristina's clear resolve "to the domestic and international public that... for Pristina, this is the end of the dialogue," Djuric said, according to Beta agency

Djuric told an extraordinary news conference in Belgrade that this decision by Pristina placed "Serbia in its most difficult position since 2011."

He said that Serbia would recognize "the right way" to respond to this challenge, more of which would be known after an urgent session of the National Security Council. Its president Aleksandar Vucic called a session for 8:30 p.m. on March 8.

"Serbia will know how to protect its national and state interests," Djuric said.