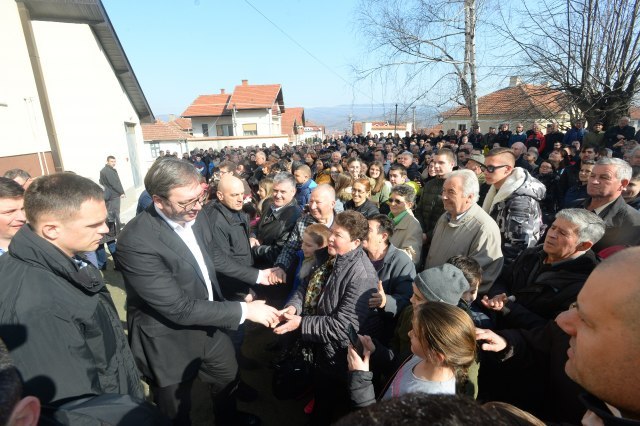 The president, addressing a gathering, stated that the leadership in Pristina is irrational and irresponsible and that "you never know what can be expected of them."

"Our goal is peace, and I am concerned about everything that the Albanians are prepared to do. But people should not worry, we will protect our people. Besides my style being a little different, I do not like to make threats and act a hero, I'm looking what will be on the scoreboard at the end of the game. And Serbia will win," Vucic said in the town of Vlasotince.

Vucic visited the primary school named after Sinisa Janic in that town, and will later in the day travel to Bojnik, Leskovac, Lebane, Medvedja and Sijarinska Banja.

In front of the school, which received students after several months of repair works, Vucic was welcomed and a large number of locals, students and teachers, as well as school director Goran Mitic, Mayor of Leskovac Goran Cvetanovic, Mayor of Vlasotince Zoran Todorovic and head of Jablanica District Milos Ciric.