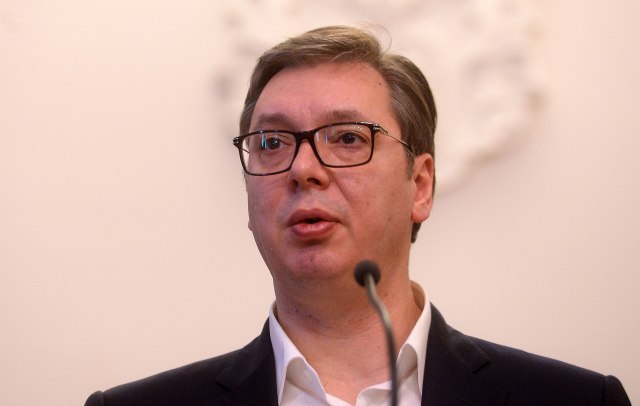 "Haradinaj is lying about that there are 40. Let them show them. I once again urge Serbs not to join that army. The only thing that army can serve for is to kill Serbs. I call on them to leave that army," said the president of Serbia.

Vucic warned that Pristina continues with serious and dangerous provocations, which dramatically endanger the survival of the Serb people in Kosovo and Metohija. At a press conference after the meeting with 139 political representatives of Serbs from Kosov and Metohija, he mentioned several such incidents, starting with "the latest" - the (Kosovo) police, i.e., the Albanians, storming territory of Zubin Potok (a town in northern Kosovo).

As he said, Kosovo police entered the territory of Zubin Potok late on Tuesday and seized a truck belonging to a Serb because he, allegedly, imported goods from central Serbia to Kosovo and Metohija via "the green line" - which, he said, caused great anger among the local Serb population.

Vucic said that on that occasion, "they petitioned Serbs ten times to return to their homes, in order to avoid further incidents."

In the next two days the adoptiong of the new Trepca (northern Kosovo mining comple) Statute will follow, leading to the blockade of its bank account, because Trepca was not registered under Serbian laws, but as UNMIK Trepca, under the auspices of the UN.

The Kosovo Albanians want to block the account, destroy Trepca, northern (predominantly Serb) Kosovska Mitrovica all th way to Leposavic,"which would mean leaving 2,400 people without jobs, and no air to breath in economic terms."

"Uniting northern and southern Mitrovica is a direct threat to the people in Kosovo and Metohija and everyone says that if this happens, it can only happen through violence, and that is the end of our people's survival," said Vucic.

The president also spoke about the demands of the representatives of Serbs from Kosovo and Metohija.

"The Serbs from the north and the south of our province have asked me to speak also with the Serbian government. They asked to withdraw from all of Kosovo institutions, parliament, the police in the North, the prosecution, and the complete judicial system (of Kosovo). I asked them not to give them my answer today, until the next meeting with the representative of China," he stressed.

Vucic said that "within 45 days, the state of Serbia will respond to these requests from Serbs."