Vucic urges Serbs in Kosovo not to join "Albanian army"

Albanians want to include as many Serbs from Kosovo Pomoravlje as possible into the Kosovo army, President Aleksandar Vucic said on Friday. 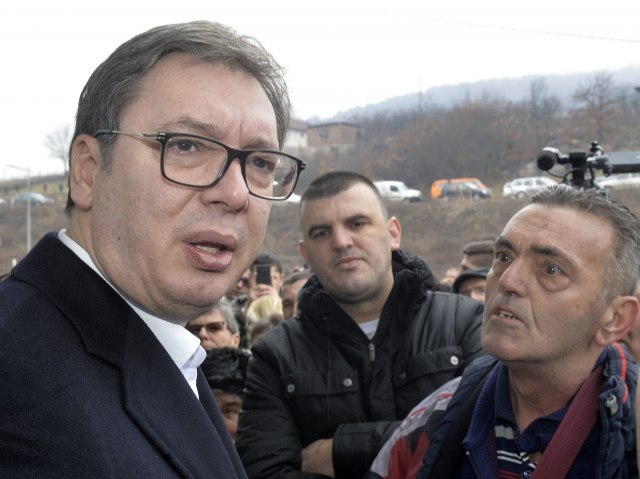 And he urged the Serbs not to do that.

Vucic made his comments after a meeting in the Raska Disctrict with officials of the Serb List, a political organization in Kosovo that gathers Serbs.

He said that he told them Serbia and the Serbs cannot survive if they go against each other, and asked them not to join or participate in the Albanian army in Kosovo and Metohija (KiM).

"We will see if the Serbs will respond or not," he added.

He also said that he for the first time heard from people from Strpce and Gracanica (Serb enclaves in Kosovo) that they are increasingly facing problems with supply of foodstuffs from central Serbia, and that even in the north of KiM there are problems because Albanians are "organizing border police to check how the goods had arrived, and grab them."

"Our job is to fight and we will fight for our people to survive," Vucic said.

He added that Serbs in Kosovo and Metohija react badly to statements coming from Pristina these days, which he added are the result of the nervousness of Albanian leaders.

His message was that the state will protect the Serb people.

Vucic added that he "fully understands why he is now the greatest enemy to the Kosovo Albanians - because to their irrational messages, he responds with rational ones, and to messages of conflicts - with messages of peace and stability."

"And I will continue to strengthen Serbia, instead of weakening it, as was the case in the past period," Vucic said.

Asked "why he, who is criticized because of Kosovo, has been left with the 'hot potato' in his hands - when (late Serbian PM) Zoran Djindjic was saying so many years ago that Kosovo was 'sliding into independence'," Vucic said that "one should not worry about nebulous comments and absurd claims of some people who have no responsibility."

"Our job is to be responsible, to tell the people the truth, to fight for interests, and people are able to recognize that. When could you see them (his critics), as you have seen us, defend the interests of the country on the big scene among world officials in Munich?," asked Vucic.

"Every day they threaten us - but our message is clear"

The president of Serbia has continued his campaign "The Future of Serbia" with the visit to the Ras (Raska) District.

Aleksandar Vucic's first stop on Friday was Vrnjacka Banja, where he visited the Health Center named after Dr. Nikola Dzamic.

In front of the building, he was greeted by the Minister of Health Zlatibor Loncar, the Raska District chief Nebojsa Simovic, Vrnjacka Banja Mayor Boban Djurovic, Health Center's Director Vesna Malacanin, and the employees of that institution.

In his address to citizens gathered on the spa's promenade, Vucic said that "every day the Serb people are threatened in Kosovo and Metohija, the message of Serbia is that it will preserve peace and stability, but nobody should understand it as a sign of weakness because Belgrade will not allow anyone, Pristina included, to attack our people."

The president also said that he had no worries about the Serbian economy, but that he was concerned about the political situation in the region.

"We have in Pristina people who behave irresponsibly, they have not fulfilled what is written in the Brussels agreement, the only obligation, the Community of Serb Municipalities (ZSO), and after that they introduced taxes of 100 percent on Serbian goods, seeking to destroy the Serb people in Kosovo, to expel them from their centuries-old homes, but also to inflict economic damage on Serbia. We can endure this damage, but we will not give up on national and state interests," he stressed.

Vucic said that Serbia is not at all playing a hero, "like some earlier who were and running away." He stressed, however, that "if we preserve peace and stability, even greater investments in Vrnjacka Banja will be possible, salaries and pensions will grow even faster."

While in the Raska District, Vucic met with representatives of Serbs from Kosovo and Metohija.

The meeting was attended by Director of the Office for Kosovo and Metohija Marko Djuric, president of the Serb List (SL) Goran Rakic, his vice-president Igor Simic, party presidency member Stevan Vulovic, Nenad Rikalo, who was dismissed from the Kosovo government, and Dalibor Jevtic, who has resigned his position in the same government.