"Thank you for not recognizing Kosovo" 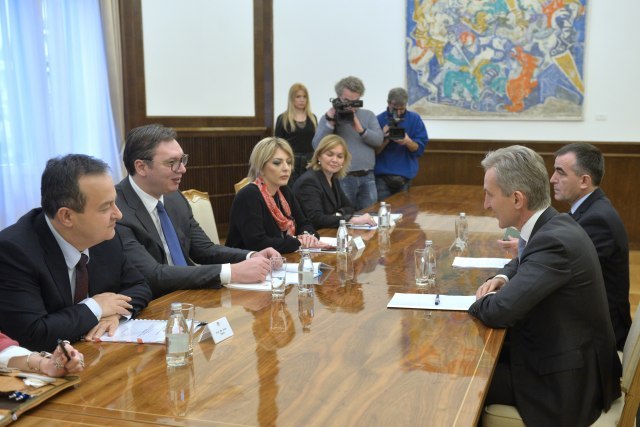 Vucic emphasized that it was necessary to encourage improvement of political dialogue and economic cooperation between the two countries, since bilateral relations are friendly, but not sufficiently developed

Vucic also expressed his gratitude for the principled position of Moldova not to recognize the unilaterally declared independence of Kosovo, and for the country's support on this issue in regional and international organizations.

The president informed his interlocutor about the deadlock in the dialogue between Belgrade and Pristina, triggered by (Pristina's) taxes on products from central Serbia, which is contrary to the CEFTA (regional free trade) agreement, signed also by Moldova.

Vucic presented to the Moldovan official the foreign policy of Serbia, which implies the intention of our country to become a member of the European Union, but also to continue to promote its traditional friendship and cooperation with Russia, as well as development of relations with other countries, the president's press service said in a press release.

They invited businesspeople of the two countries to establish new modalities of cooperation within the CEFTA agreement, as well as to participate in economic events and fairs organized in Serbia and Moldova.

It was also stated during the meeting on Tuesday that it was necessary to accelerate improvemnt of the contractual and legal basis of bilateral cooperation, in particular the signing of the Agreement on Mutual Promotion and Protection of Investments.

The possibility of establishing a program of cooperation in the field of education, science and innovation soon has also been mentioned.

Leanca expressed gratitude to Serbia for the policy of respecting Moldova's sovereignty and territorial integrity.

He expressed the interest of his country, as a participant in the European Union's "Eastern Partnership" program, whose foreign policy priority is EU membership, to use Serbian experiences in the European integration process, said the president's press service.