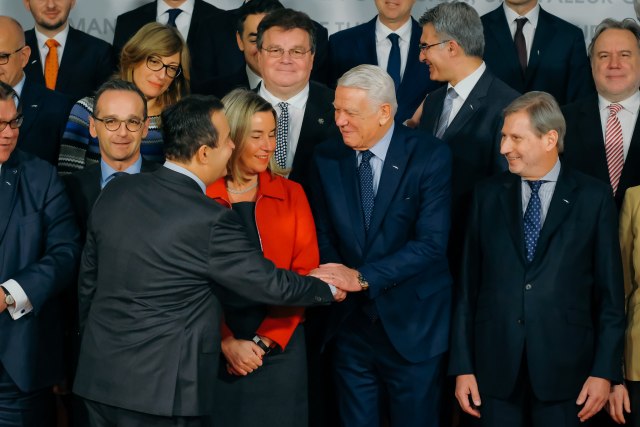 Tanjug is reporting this citing a report in the Belgrade-based tabloid Kurir, which said the incident happened during an informal EU ministerial meeting in Bucharest, Romania, over the weekend.

According to this, Pacolli, who serves as foreign minister in the Pristina government, spoke "without restraint, and in Serbian," when he addressed Dacic to say: "If there should be an assassination, you should know it's us Albanians."

Dacic commented on this later to tell Kurir that "Albanian politicians are nervous because the ground is collapsing under their feet."

"I'm already used to threats, but this is the first time an Albanian politician has said it to me so directly. It just shows how nervous they are, the ground is collapsing under their feet. They thought it was all over," Dacic said, and added:

"I replied to them that I am their minister, and they my assistants, because Kosovo is a part of Serbia. They're used to getting everything by force. Now they have hit the wall. There's no backing down, regardless of the threats."

Previously during the Gymnnich format meeting, that brought together EU foreign ministers and those from EU candidates, Dacic concluded that there were two Kosovo foreign ministers at the table, referring to Albania's acting FM, Gent Cekaj, who is originally from Kosovo.

According to the Albanian website Balkanweb, Dacic said: "Why does Kosovo have two foreign ministers at the table. That's heavy provocation by the (official) foreign minister and (prime minister) Edi Rama."

Cakaj then reportedly responded to say that Dacic "should have been provoked before considering that Kosovo has had two foreign ministers before."

"You're from Prizren (a town in Kosovo), aren't you," Cekaj asked Dacic, and added, "I'm an Albanian from Kosovo and I'm representing Albania here."

"Well yes. We're all from Serbia here. Kosovo is Serbia," Dacic replied - which "made Pacolli lose it and threaten with an assassination."

Edi Rama, meanwhile, is officially both the prime minister and the foreign minister of Albania, while Cakaj is acting foreign minister, thanks to Rama delegating his ministerial power in full to him.