"Proud of reforms, but not of criticism of media situation"

When a reporter said Serbia was the next country where a journalist could be killed, I did not believe that it was possible, says Aleksandar Vucic. 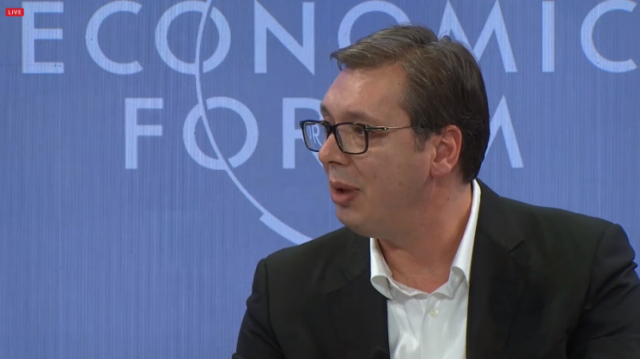 Speaking at a panel in Davos dedicated to media freedoms, the Serbian president added that he is on one hand satisfied with the economic reforms carried out in Serbia, but that this was not true of other things - referring to the situation in the media.

"As proud I am of economic reforms and the preservation of peace and stability in the region, I am not so proud of the criticism of the freedom of the media in Serbia," he said, adding that "in cooperation with international professional associations, progress will be made in the next two years in that area, that we will be proud of."

He said that the situation in the media in Serbia is polarized, and that there are many problems in that field.

"I will give you my example so you could learn something from it," the Serbian president said, and said that a reporter, speaking about Serbia, had said this could be the next country where a journalist would be killed. "Fortunately, it wasn't, but it did happen in sone EU countries," Vucic said.

However, he continued, a Serbian journalist wrote something in local media, against local government structures, and his garage was set on fire, and then the fire spread to his house, and his entire family was in danger.

"Then I began to think about those words, even though I did not believe that something like that would happen in my country. We arrested the person who did it, as well as the person who organized everything, but we did not arrest the organizer. I expect the case to be finalized in about ten days. After this I learned something, I started to be careful and afraid. We have to finish this case and be 'brutal' in every such case," Vucic said.