"More people came to see Putin than would've done for me"

Serbian President Aleksandar Vucic on Friday expressed his gratitude to Russian President Vladimir Putin for his visit to Serbia the day before. 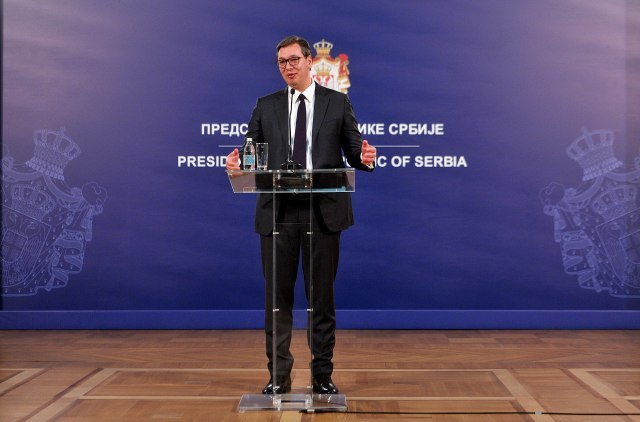 Vucic also thanked citizens of Serbia who turned out to greet Putin.

"I express my gratitude to Putin for visiting Serbia, for the time devoted and the respect shown to our country, as well as for the concrete agreements that we have signed," Vucic told a press conference, organized on the occasion of Thursday's visit of the Russian president.

After emphasizing the significance of all the agreements that were signed yesterday, the president especially thanked those citizens of Serbia who came in huge numbers for Putin. "I would never be able to attract as many people, as much as I might have called on them. Not even half would've come, they see me every day," Vucic said.

"I thank them for showing how decent Serbia can be, and function," he added, noting that there was not a single incident last night. "When you have more than 100,000 people, and not a single window broken, I think that's almost impossible in the police practice," he said.

The Serbian president also said that no one was injured, in any way, and that there were no incidents. "I am so pleased that we have shown to what degree we can be decent, responsible and serious," Vucic said.

He also said that he believes China's president would visit Serbia again in the second half of this year, while he hopes that the president of France would arrive here "before that."

"There could be surprises, some other great presidents visiting Serbia," Vucic said.

"The other thing, my plea and appeal, to our EU partners to even more strongly influence Pristina to abolish taxes (on goods from central Serbia), because I think it's important to continue talking about the future. I plead with them for their demands, not to say pressure, to be clearer and more specific because it is terribly important that we continue to talk, firstly because of the Serbs in Kosovo and Metohija, and then because of us," he said.

Vucic also commented on Kosovo Assembly President Kadri Veseli's statement that "Russia was moving toward recognizing Kosovo," and also, that Pristina "hopes to become a UN member this year."

"I didn't hear that from Putin, he told me the exact opposite," Vucic said on Friday, and added:

"Putin said everything he thinks about Kosovo four or five times into the microphone. I congratulate Kadri Veseli, he's heard something nobody else has, and that takes special skills."

Aleksandar Vucic said on Friday a gas agreement reached with Russia was crucial for Serbia because, once complete, it would raise the country's "value."

Vucic recalled Gazprom CEO Aleksei Miller had said a gas interconnector between Serbia and Bulgaria would be completed by the end of the year.

"We refer to it as the central gas pipeline, which will be 420 kilometers long. It would be of substantial, strategic significance for Serbia's future. It is a huge investment and we will share the financing, the percentage remains to be seen," he said.

This is hugely important for the future, industrialization and progress of Serbia, as well as for GDP growth, Vucic said.

He said Serbia would build a 750 million cubic meter gas storage to be able to intervene at any time in case of shortages.