Russian President Vladimir Putin was on Wednesday visiting Serbia, where he was hosted by Serbian President Aleksandar Vucic. 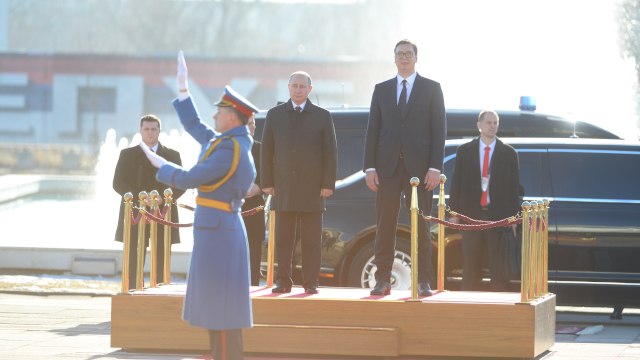 Vucic welcomed Putin at Belgrade's Nikola Tesla Airport, and the two presidents then took part in a wreath-laying ceremony at the Cemetery of the Liberators of Belgrade and at the Monument to the Red Army Soldier in the Serbian capital.

Putin was then given the official red carpet welcome in front of the Palace of Serbia in New Belgrade.

"I wish to thank you sincerely for investing a lot of energy, effort, work, time, respect, and love in the progress and development of Serbian-Russian relations. Thank you also for supporting Serbia's independence, for respecting her integrity."

"I think that Russia could always count on having an ally in Serbia," Vucic said.

Putin responded by thanking citizens of Belgrade and Serbia for their warm welcome.

"I am very happy to have the opportunity to visit the friendly and brotherly Serbia, and to discuss everything we have done, and the things we need to do," the Russian president said.

"You have done much in recent years for development of Russian-Serbian relations and, today, I will have a nice opportunity and the pleasure to award to you a state honor, the Order of Alexander Nevsky, for your contribution and for everything you have done," Putin said to Vucic ahead of their closed-door meeting.

The two presidents first met face-to-face meeting, followed by a plenary session between the delegations of the two countries.

Before this meeting was also closed to the public, Vucic once again expressed his gratitude to Putin and the Russian Federation for the support to Serbia and the Serbian nation, for the preservation of Serbia's territorial integrity and active assistance in this regard in all forums, organizations and institutions.

"It is characterized by good understanding in all key areas and it seems to me that we have moved from words to actions, in particular in the areas of energy, military cooperation, infrastructure, transport, as well as in education, culture and all other spheres of social life, I believe we can further improve our trade volume," Vucic said.

Vucic and Putin were later present at a ceremony to sign numerous bilateral agreements between the two countries.

The Russian president then presented his Serbian counterpart with the Order of Alexander Nevsky. Vucic accepted the accolade, thanking Putin in Russian.

In the evening Putin and Vucic visited the Serbian Orthodox Temple of St. Sava, with huge crowds gathering in front of the shrine to welcome the Russian leader.