Dialogue to continue once trade barriers are lifted - Vucic

President Aleksandar Vucic says he had a working lunch with the representatives of the EU and thanked member states for their support to Serbia's European road. 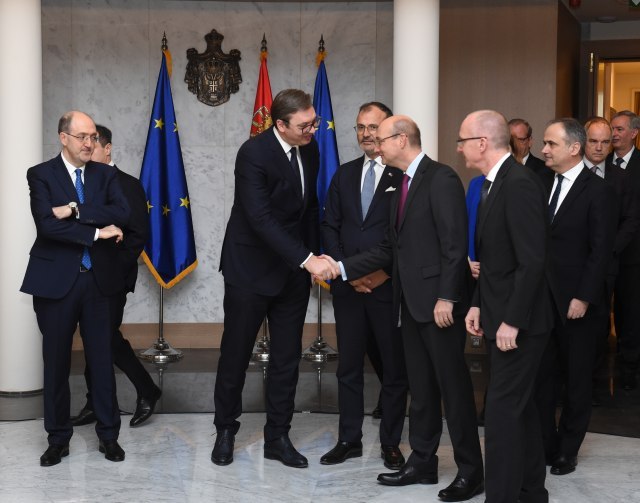 Vucic met in Belgrade on Tuesday with ambassadors and diplomatic representatives of EU member states.

As he said, the meeting lasted more than two hours, and concerned "what Serbia must do when it comes to its European path."

"There are two things there. After the anti-civilization taxes imposed by Pristina (on goods from central Serbia) have been abolished, to continue the (Belgrade-Pristina) dialogue," he said, and added:

"Despite the fact that this is not politically popular, nor does it appeal to our people, I said that we are ready to continue this conversation. You know I'm not an optimist, but energy needs to be dedicated to solving this problem."

"The second thing and what is EU's focus is the rule of law and we have received many different things that we must do in the fight against corruption and crime, freedom of the media, independence of the judiciary. Much is ahead of the government, but also the parliament that has to play the most important role," Vucic said.

He added that "all regional issues" have also been discussed.

Vucic remarked that the date for the meeting with EU representatives was chosen by chance, and had nothing to do with the arrival of Russian President Vladimir Putin here in two days' time.

The head of the EU Delegation to Serbia Sem Fabrizi also spoke to reporters after the meeting, to say that the date was agreed on "last year."

"Every day something happens in Serbia, I would not invest too much in the coincidences you are mentioning," Fabrizi told journalists.