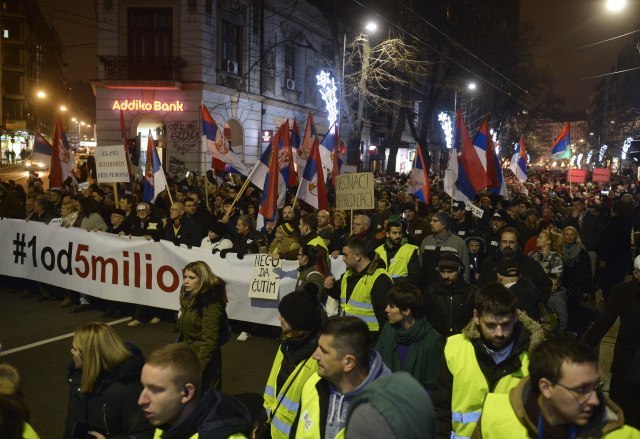 23The marchers called for the resignation of Serbia's interior minister Nebojsa Stefanovic and a new rally was scheduled for Jan. 5.

One of the organizers actor Branislav Trifunovic said that the minister should step down for not doing his job, and belittling the people.

"Instead of trying to figure how many protesters there were in Belgrade from looking at a photograph, he should better count the number of murders and start doing his job," Trifunovic said, who is requesting the minister's dismissal.

The organizers repeated the demands that they voiced in the past three weeks five minutes for the protests on the Serbian Broadcasting Corporation (RTS) channel, equal coverage by the public service of all political options, the identifcation of the killers and masterminds behind the murder of the SDP Initiative leader, Oliver Ivanovic, as well as those behind a murder attempt on Serbian Left leader Borko Stefanovic and journalist Milan Jovanovic.

"Until they meet our demands, we will keep rallying every Saturday in increasing numbers, one of the organizers, Jelena Anasonovic, said at the end of the march.

At the start of the demonstrations at the School of Philosophy, where speeches are given, Trifunovic said the protests were being held by citizens provoked by Vucic and his behavior and actions.

Journalist Srdjan Skoro said that Serbia had witnessed "all kinds of governments, but liers and thieves like these have never been seen before."

Skoro said that Vucic dared not take part in a TV duel with his political opponents and only spoke to different "Barbaras" on TV.

The Rakita local community's leader, Desimir Stojanov, urged Vucic to abolish a law allowing for the construction of mini power plants, which he said threatened ecosystems.

After the speeches, thousands of citizens took part in a protest march through Vasina, Makedonska, Svetogorska, Takovska and Kralja Milana streets to Slavija Square. The streets were closed for traffic until the march ended.

A huge banner reading "1 in 5 million" was across the first line of protesters, followed by a group of drummers and a truck with loudspeakers.