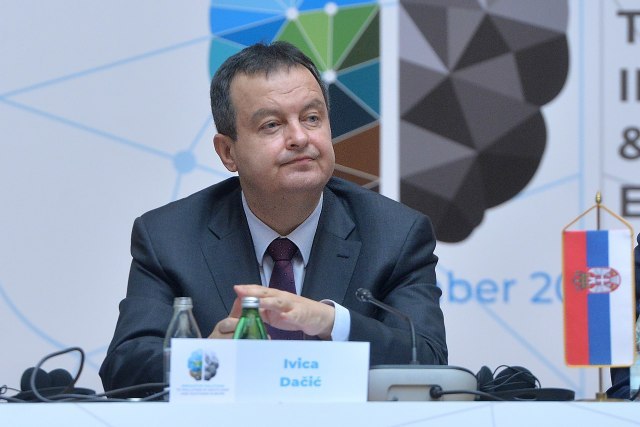 First Deputy PM and Foreign Minister Ivica Dacic stated this, adding that it was also ridiculous to say that Montenegro was "not making anti-Serb decisions, but those its own interest."

"I suppose Djukanovic means Montenegrin interests, which is nice - because Serbia is also making decisions in its own interest," Dacic told Podgorica-based daily Dan.

"Should I apologize to somebody because of that?," he asked.

Another thing that Djukanovic hinted at in the same interview is that Serbia is responsible "for Montenegro's destruction," the minister observed, adding, "whatever that means."

"Serbia has neither banned any Montenegrin citizens from entering Serbia, nor does Montenegro's entry into the EU depend on Serbia. Therefore, it's really ridiculous," Dacic said.

He at the same time assessed that relations between the two countries are stable, while Serbia is "open to discussion of all topics that both consider important - and Serbia wishes to Montenegro that it joins the EU."

"But, we cannot accept the role of the usual suspect for everybody's problems. In the end, Montenegro will at long last understand that there is no sorrow in Serbia because of the separation with Montenegro. Have a safe trip, and I wish we never joined (into the common state) in the first place," Dacic said.

According to him, if somebody should regret this happening in 1918, it's Serbia, a country that lost 28 percent of its population in the First World War.

"Who is Montenegro complaining about, (Yugoslav King) Aleksandar Kradjordjevic, a half-Montenegrin, the grandson of Montenegrin King Nikola Petrovic? Anyway, Kradjordjevics themselves are Petrovics who moved to Sumadija (Serbia's central region) from the hills of Montenegro and Herzegovina. Somebody from Sumadija, Krusevac or Topolica (Serbian towns) would never abolish Serbia for the sake of (creating) Yugoslavia," the minister observed, and added:

"And why would we have regrets because of Montenegro? We were two states before. The only thing that never happened was Montenegro and Serbia being in conflict. That's what's tragic. Besides, (Montenegrin) King Nikola, when he made his proclamation to the people in 1914, wrote, 'long live Serbdom'. I didn't write that, he did."

Dacic further said that the gusle is both a Serb and a Montenegrin instrument, but that he never heard a song performed on it that spoke about conflict between Serbia and Montenegro.

"That's why when there's talk in Montenegro about the Greater Serbia aggression, I always joke and say that I'm only aware of the Greater Montenegrin aggression targeting leading positions in Serbia," he said.

"In conclusion, I wish all the best to Montenegro, I don't care what they're doing, except when it touches on Serb national and state interests and the position of Serbs in Montenegro, who make up 30 percent (of the population). That's a sovereign right of each state. We should be doing all this in mutual friendship," Dacic said.

According to him, the position of Serbs in Montenegro is an important element in bilateral relations.

"We consider Serbs to be a constituent people in Montenegro, by no means a minority. Otherwise, the issue of which language is spoken by citizens of Montenegro we leave to them to decide, although it's a fact that when our officials meet, they don't need interpreters," the minister said.

He also stressed that Serbia thinks the Serbian Orthodox Church in Montenegro is an important part of its history and culture, and is treated as such by Belgrade.

"And I personally believe that Montenegro's majority population thinks the same. However, all these issues can be solved through dialogue and are part of the discussion during meetings of our two countries' officials. I think that it would be healthy for our relations, but also for Montenegro's internal stability, if Serbs became a part of the ruling coalition. Many problems could be overcome in that way," Dacic said.