"Who came up with this and what will we sign in Washington?"

Aleksandar Vucic says it's not clear to him how Hashim Thaci came up with stating that an agreement between Belgrade and Pristina would be signed in Washington. 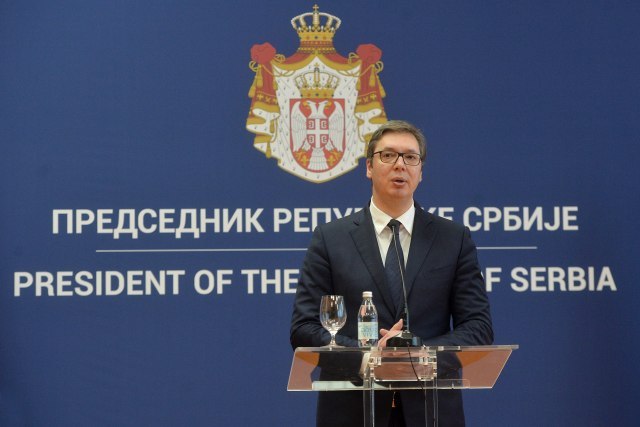 The president told RTS late on Thursday that he "knows neither who came up with it, nor when Thaci was told this," and also wondered, "what are we supposed to sign."

As he pointed out, a Kosovo solution is not in sight, and added that he had "stressed this before."

Vucic also said that Serbia is often "falling into the trap of the fake quarrels taking place in Pristina."

"Becim Colaku (advisor to Hashim Thaci) said that he was in favor of revoking the tax (on goods from central Serbia), in order to open the way for Thaci in the US. Do not forget that these taxes would not exist if Thaci's party didn't vote in favor. They play good cop, bad cop. In Brussels, they like Thaci, in London they like Haradinaj...," said Vucic.

He also said that the state will help its people in Kosovo and Metohija affected by Pristina's trade measures.

The president stressed that "Serbia will win and our people in Kosovo and Metohija will survive and will not be hungry."

"We will not allow them to be without the state's support, in every sense, for one moment," Vucic said.

He added that "we don't have many choices when someone acts not just unlawfully, but irrationally, like Pristina has done with the taxes, and in this situation we have to endure and wait for the moment when those who supported them will come to reason and the taxes will be abolished."

"We hope that it will happen as soon as possible," he stressed.

Asked to comment on Kosovo President Hashim Thaci's allegations that the killers of Serb politician from Kosovo Oliver Ivanovic are "in Belgrade," Vucic said he would add to the words of the director of the Kosovo and Metohiha Office, Marko Djuric.

"If they are in Belgrade, and you are the ones who are conducting the investigation, and (are saying) 'well maybe Vucic didn't (do it) directly, but maybe one of his did, I've no interest in them. But those who are playing state should say these names and we will arrest them. We're not looking for solid evidence, just small evidence," Vucic said.

"And those who say that the Serbian authorities are involved in this, it doesn't suffice to say they should be ashamed, it's so horrific, maybe they did that to their their political opponents, but we would never do it," Vucic added.

"I am completely prepared to answer for anything that anyone thinks (I did)," Vucic emphasized.

Asked about the allegations that Serbia is "meddling in the events surrounding the case of the death of David Dragicevic in BiH," Vucic said: "This is a blatant lie."

"Since 2014, Serbia has been investing money and supporting the Serb Republic (RS) its citizens. I want to ask the people of the RS not to listen to liars and those who want two eyes in the same head to quarrel. No policeman (from Serbia) participated in Banja Luka or elsewhere. We have an agreement where Serbia respects the RS and vice versa, and we do not interfere in anyone's internal affairs. That does not mean that I will not hear out David Dragicevic's mother and father. Serbia and the RS, if they want to survive, must stick together," the president said.

When it comes to several protests that have been held in Belgrade recently, Vucic said they were peaceful, and that the police will not intervene as long as they remain that way.