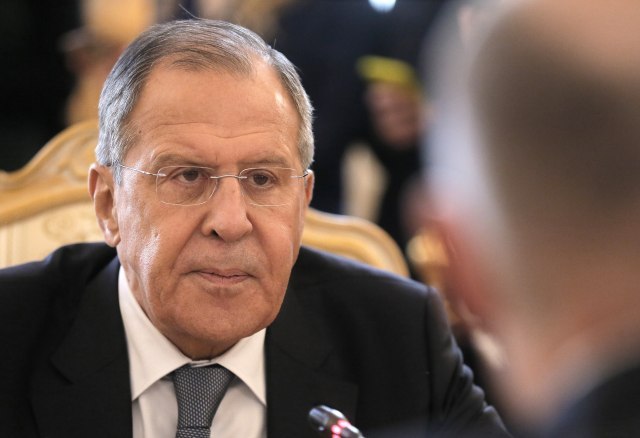 In his message dated December 21, Lavrov said that Moscow is ready for further close cooperation "on the Kosovo issue."

The Foreign Ministry announced in a press release late on Tuesday that Dacic was presented with Lavrov's New Year and Christmas (to be celebrated in Serbia and Russia on January 7) message during a meeting in Belgrade with Russian Ambassador Aleksandr Chepurin.

Lavrov noted "with deep satisfaction" that the outgoing year was characterized by the active strengthening of the strategic partnership between the two countries.

"Many contacts have been held at the highest and other levels. I am convinced that the continuous realization of the joint projects and plans of further deepening of Russian-Serbian cooperation will create a good base for the coming years," Lavrov said.

The head of Russian diplomacy said that he recalled the warm welcome that was given to him during his visit to Belgrade on February 21 and 22, marking 180 years since the establishment of formal diplomatic relations between Russia and Serbia.

"I count on new meetings in the coming year to continue with substantial exchanges of views and coordination of steps in the international arena. We are ready for further close cooperation on the Kosovo issue," Lavrov said.

The MFA's statement added that Dacic and Chepurin also "summarized the results of the excellent cooperation between the Republic of Serbia and Serbia.

Dacic said the visit represents "a very important event for our country and people" and pointed out that it was being assigned "exceptional importance."

Prime Minister Ana Brnabic also received Ambassador Chepurin on Tuesday, who expressed his hope that the next year will bring even stronger economic growth, peace and stability in the region, and wished a happy New Year.

Brnabic also wished him a happy New Year and expressed the belief that the development of mutual cooperation between the two countries will continue in 2019, the Serbian government announced.

The prime minister "expressed her gratitude for the support of the Russian Federation and the consistent position of the ambassador of that country in the United Nations during the extraordinary session of the Security Council, held at the initiative of Serbia, on the unilateral moves of the Pristina side."

Brnabic "stressed that the upcoming visit by President Vladimir Putin is of great importance to Serbia and another confirmation of good relations between the two countries."