Commenting on the announced formation of an army in Kosovo, Prime Minister Ana Brnabic said on Wednesday that she hoped Serbia would not have to use its army. 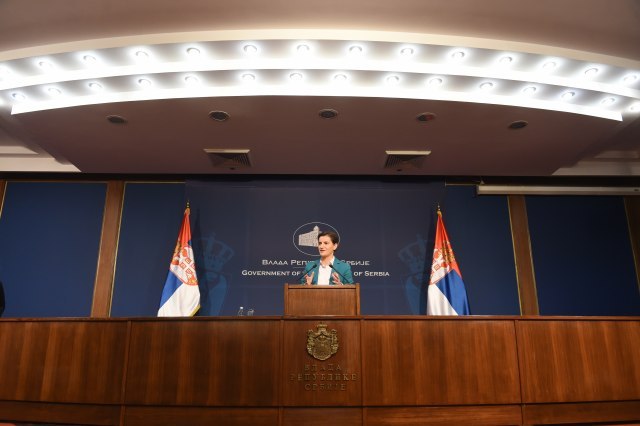 But, Brnabic added - addressing journalists during a news conference at the seat of the Serbian government in Belgrade - "that is one of the options."

"I hope that we will never have to use our army, but at the moment it is one of the options on the table, because we cannot watch a new ethnic cleansing (of Serbs) and new storms (an apparent reference to Croatia's Operation Storm) - although (Prime Minister of Albania) Edi Rama is calling for them," she told journalists.

The prime minister said she would "ask all European leaders what they would do if they were in her place."

She reiterated that her government's priority is education and digitization, and that it is in "a schizophrenic situation - whether someone will, contrary to everything normal, all the agreements, and even their own acts, create an army, and on December 15 move to subjugate people only because they are Serbs."

Brnabic remarked that since the time Aleksandar Vucic became prime minister, Serbia has been investing in raising its defense capacities, because they had been devastated. "When someone knows you have a strong army, then they have to sit down and talk to you," said Brnabic.

The prime minister, however, did not wish to comment on media reports that Americans are sending weapons to Kosovo (via Albania) - pointing out that this is "a serious issue" and that she hopes that there will be "a sufficient amount of reason on the part of the United States to know what is good for their partners in Pristina."

"Pick a reason, then stick to it"

Ana Brnabic also said during the news conference that the sole goal of Edi Rama's latest statements is political spin, and blaming Serbia for all the unreasonable decisions made in Pristina.

Brnabic, reacting to Albanian PM's statement made in Croatia - who said that Serbia had "violated the CEFTA (free trade agreement) - said she thought he was responsible, but was unfortunately wrong.

"I think that the job of a government, if one is responsible, which I thought Edi Rama was, is to deal with concrete things and truths that will contribute to the quality of the citizens' lives in the future," the prime minister said, according to Serbia's public broadcaster RTS.

As she pointed out, without the stability of the region, there will be no safe and stable country in that region.

Brnabic added that she "does not like to to respond to completely bold-faced lies and groundless claims" - but did it this this time, considering the difficult situation.

The prime minister said that her first thought was that over in Pristina, "they should have agreed on what their explanation for the introduction of the (100 percent) tax on products from central Serbia and Bosnia-Herzegovina would be - and then stick to that explanation, instead of changing it every week."

She recalled that the first explanation was that the tax was the answer to Serbia preventing so-called Kosovo from joining Interpol.

"I think we all heard that, both Serbia and other countries, the EU and the international community," the prime minister said.

But, according to her, "when they saw this made no sense and was not holding water" they changed the explanation into accusing Serbia of having violated the CEFTA agreement.

"Let's agree on why the taxes have been imposed, so that we can respond to it. Is it because of Interpol, or because the CEFTA agreement has been violated by Serbia?," Brnabic asked.

She added that she found it incredible that Edi Rama "went a step further to say that Pristina had complained about the violation by Serbia, but received no reaction from the other side."

"If Pristina did complain, please show us this complaint. This is either black or white, there is no gray zone," Brnabic pointed out, stressing that the CEFTA agreement is clear and unambiguous and that there is an official formal complaint process.

The prime minister also said that Serbia complained (about Pristina's taxes) on November 27 by sending an official request to the CEFTA Secretariat.

Brnabic added that if it turns out that there is no evidence that Pristina had also complained (prior), then Edi Rama has tried to deliberately deceive the public in the region and in the EU.