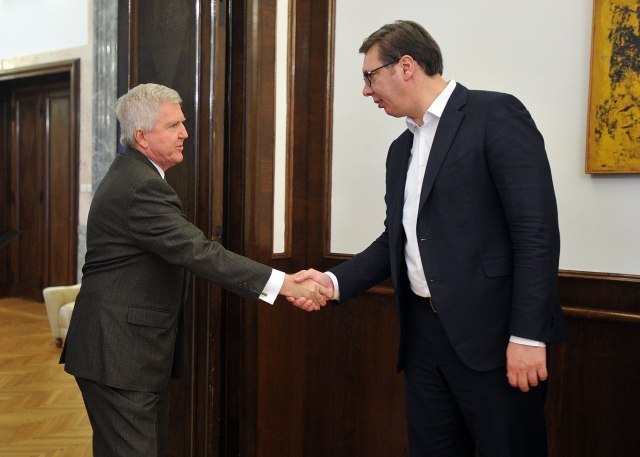 Vucic spoke with Scott about the situation in Kosovo and Metohija, pleading with the United States use its political influence and warn Pristina that its moves are endangering peace and stability in the region.

"Pristina's persistence on taxes on goods from central Serbia and, moreover, on the formation of the army of so-called Kosovo is causing great concern for Serbia about the future of the Serb people in Kosovo and Metohija," Vucic said.

Scott pointed out that the tax in question is violating of the CEFTA (trade agreement) and jeopardizing the future of the region, the press release said, and added that he recalled that US State Secretary Mike Pompeo urged authorities in Pristina to abolish the tax on goods from Serbia and Bosnia-Herzegovina.

Scott reiterated that the United States supports Belgrade's efforts to normalize relations with Pristina and is ready to help achieve a sustainable solution that would allow stability, thanking Serbia for its restrained response to the latest developments.

Vucic reminded of the provisions of the Brussels agreement and UN Security Council Resolution 1244, as well as of CEFTA, stressing that Serbia did not violate any of them.

"Serbia is progressing economically at an accelerated pace and is therefore sincerely in favor of peace and stability," the president said, adding that Pristina needs to abolish the tax, in order to continue the Brussels dialogue and seek a compromise solution for the issue of Kosovo and Metohija with the mediation of the European Union.