EU Commissioner Johannes Hahn is visiting Belgrade this Monday where he has met with Serbian President Aleksandar Vucic. 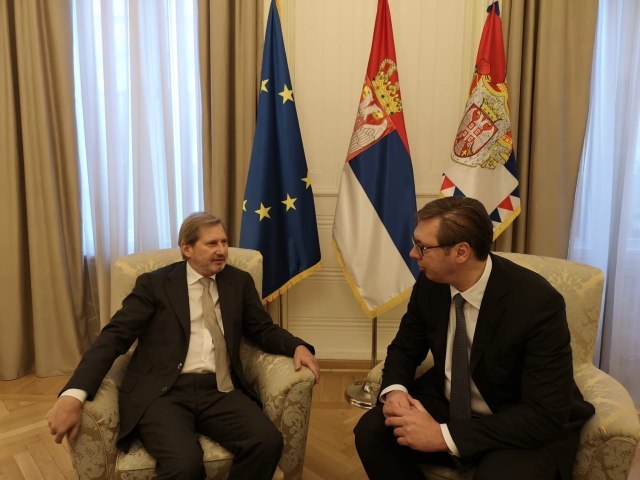 Hahn, who is in charge of EU's enlargement negotiations and neighborhood policy, will then travel to Pristina, the European Commission has confirmed for Tanjug.

The main topic of talks in Belgrade and Pristina will be the decision of the Kosovo authorities to levy (100 percent) taxes on goods from central Serbia and Bosnia-Herzegovina (BiH).

"The Commissioner will reiterate the position of the EU, call for revoking these measures, and emphasize the need for focusing on the improving good neighborly relations and regional cooperation, which are the principles that Kosovo and all partners from the Western Balkans have accepted," the Commission said in a statement.

The European Commission announced on Friday that Hahn will in Pristina meet with officials there Hashim Thaci, Ramush Haradinaj, Kadri Veseli, and representatives of the opposition.

The EU has repeatedly stressed that they have clearly demanded the withdrawal of taxes imposed on goods from Serbia and BiH from the authorities in Pristina.

Meanwhile, General Secretary of the Serbian Foreign Ministry Veljko Odalovic on Monday said that he expects Hahn to present a clear demand to representatives of provisional Kosovo institutions to "come to their senses" so that the Belgrade-Pristina dialogue could continue.

Odalovic told RTS that he believes Hahn's visit will "bring results, with the situation developing in a positive direction."