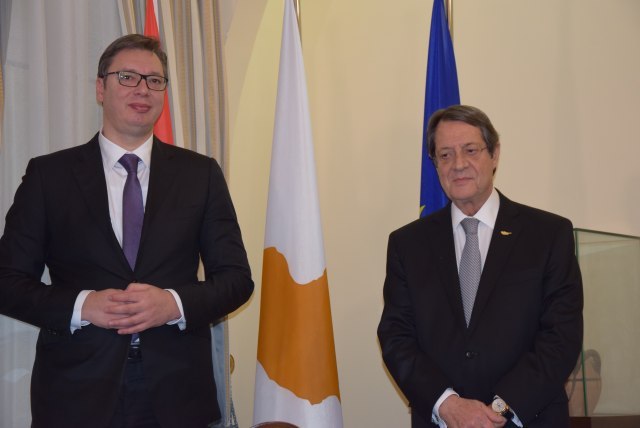 During a joint press conference in Nicosia, Anastasiades said Cyprus respects Serbia's sovereignty and territorial integrity, as well as its path towards the EU.

"I have reiterated the clear and explicit position of Cyprus according to which - due to the lack of an appropriate status solution acceptable to both sides - Cyprus considers the unilaterally declared independence of Kosovo illegal. At the same time I repeated the clear position of the Cypriot authorities about respecting the sovereignty and territorial integrity of Serbia," the Cypriot president stressed.

Anastasiades also supported Serbia's EU path, stressing the importance that Cyprus assigns to it, and adding that his country counts Serbia among the top candidates to join the EU. He also announced the establishment of a trilateral format of cooperation along with Greece, modeled after similar formats that already exist in the Balkan region.

This mechanism will encompass all spheres of cooperation where there are common interests, in order to promote peace, stability in the Balkans and the Mediterranean, the Cypriot president said.

A joint session was also held in Nicosia today between the governments of the two countries, and a number of agreements have been signed. Anastasiades pointed out that this was the second such joint session, the continuation of the one held in May in Belgrade. "We are demonstrating in practice our joint will to further strengthen and consolidate the already exceptional relations and connections - social, religious, cultural - between our countries and nations," said Anastasiades.

According to him, the meeting was an opportunity to exchange views with Aleksandar Vucic and the ministers regarding further strengthening of cooperation in the already existing sectors of activity, and expanding this cooperation.

Anastasiades added that the starting point for priorities, both at the bilateral and multilateral level, has been established. Also, it has been agreed to hold a Serbian-Cypriot Forum in Cyprus, in order to strengthen economic ties.

As for the Cypriot issue, the president said he spoke with his Serbian counterpart about the efforts to resume negotiations with the other (Turkish) side, halted last July. It is a process that, in addition to good preparatory work, should be based on the relevant resolutions of the UN, European law, he said.

"I expressed the gratitude of the government and all of us for the continued support of Serbia in resolving the Cyprus issue," said Anastasiadis. He also expressed his gratitude for the contribution made by the Serbian peacekeepers participating in the UN mission (in Cyprus).

Aleksandar Vucic told the joint news conference that Anastasiades had accepted his plea for engagement in the international arena regarding Kosovo.

According to Vucic, Anastasiades would write to all European leaders to warn of the potential consequences of all of Pristina's moves.

"I asked him to inform and warn European partners of the potential consequences of Pristina's moves and he told me he would send letters to all leaders. I am grateful because I know how well his voice is heard in all European capitals," Vucic said.

The president thanked Cyprus for its sincere support to Serbia on its EU path and in preserving the country's territorial integrity and sovereignty. He particularly thanked Cyprus for the support given to Serbia in Interpol - i.e., in preventing Pristina's recent bid to join the organization.

"Cyprus not only voted (against), but fought for Serbia, just as our delegation has done. To our brothers from Cyprus - we will never forget that. We are very loyal and we know how to remember such things," Vucic said.

The Serbian president extended his gratitude to all citizens of Cyprus for supporting his country, and said Serbia would stand with the Cypriot people and authorities.

"You will always be able to count on our country's support in institutions, organs, and organizations worldwide," Vucic said.