Ivica Dacichas thanked Egypt's Foreign Minister Sameh Shoukry for the fact that Egypt "does not want to further improve relations with 'Kosovo'." 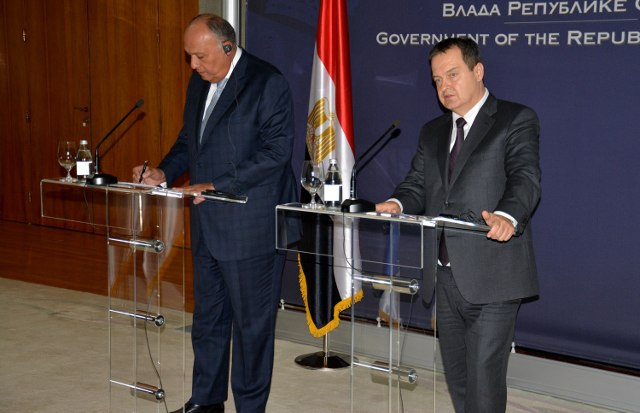 The Serbian government announced this after Dacic, who serves as foreign minister and first deputy PM, met with Shoukry in Belgrade on Tuesday.

Dacic told reporters after the meeting that Egypt, after its former authorities recognized the independence of "Kosovo", has created "some sort of frozen relationship."

He said he discussed with Shoukry how to bring relations between Egypt and Serbia "back to a satisfactory level."

Egypt and the former Yugoslavia were the founders of the Non-Aligned Movement, and they shared many common interests and wanted to help each other, he noted.

According to Dacic, they agreed to hold a meeting of the Mixed Economic Cooperation Committee of the two countries in the first half of next year, in order to improve economic cooperation, as the level of trade exchange over the last year was only $70 million.

Shoukry said that the goal of Egypt is to improve bilateral relations with Serbia – from economy to education.

"I hope that this will be initiated by the Mixed Committee," said Shoukry, who is co-chairman of the body together with Dacic.