The mayors of the four Serb municipalities in northern Kosovo have signed a four-point declaration, after which they resigned all their functions. 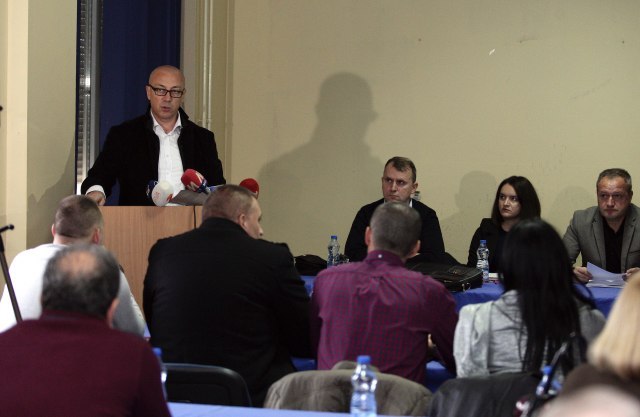 At Tuesday's extraordinary meeting of the mayors of the municipalities of Kosovska Mitrovica, Leposavic, Zubin Potok and Zvecan, a declaration was signed by which the leaders of these municipalities withdrew from their functions and severed any communication with the authorities in Pristina.

As stated during a press conference, after the conclusion of the extraordinary session, the mayors of the four Serb municipalities signed a joint declaration consisting of four points, stating the reasons for their decision to abandon the functions and any communication with the authorities in Pristina.

According to the first point, such a decision was made due to the introduction of inhuman3 charges of 100 pe cent on Serbian goods, which severely threatened the right to life, medical treatment and survival of Kosovo Serbs, leading into an even deeper crisis.

The second point states that the declaration is signed because of continuous violence, the beatings of Serbs, the unlawful arrests and an attempt to kill Milan Radoicic, which also jeopardizes the right to life to Serbs in Kosovo.

Point three lists violations of all international agreements, from (UN Security Council) Resolution 1244, the Brussels agreement, and CEFTA (regional free trade agreement), while point four states that the decision is made due to Pristina violating its own legal acts according to which the rights of the Serbs must be respected.

It is also explained that this gesture should not be interpreted as unwillingness to defend one's own people.

In the meantime, Tanjug is reporting that the court in Kosovska Mitrovica, along with the court units in Zubin Potok and Leposavic, and all the judges and employees of these courts, stopped working 09:00 hours.

In this way, they expressed their solidarity with the citizens and the protests organized because of Pristina's measures and violations of the human rights of Serbs in Kosovo. Court President Nikola Kabasic sent a letter to the heads of international missions and certain influential embassies in Kosovo and Metohija.

A protest was held at noon over Pristina's increasing of taxes on goods from central Serbia by 100 percent.

Explaining his resignation, (North Kosovska Mitrovica Mayor) Goran Rakic ​​stated that the reason was the continuous institutional repression carried out by the Kosovo institutions from Pristina, as well as the endangering of the human rights of the Serb people.

"I submit my resignation because of anti-civilization, unlawful and inhumane taxes on Serbian goods of 100 percent, which endanger the right to life, treatment, public information, survival and stay of Serbs at their homes," Rakic ​​said.

The reason for the resignation, he added, was "the continuous institutional violence of the Kosovo institutions, the beatings of political representatives of the Serb people, the unfounded arrests of citizens and the attempted murder of vice-president of the Serb List Milan Radoicic ", as well as the violation of all international agreements and legal acts guaranteeing the rights of Serbs in these areas."

Stevan Vulovic, who resigned as mayor of Zubin Potok, told RTS he would ask the Assembly speaker to call new elections according to the Serbian system. With this gesture, he said, he shows that he stands with the Serb people.

"We have suffered torture for the past five years from both the international community and the provisional Kosovo institutions. Everything comes to an end, and so has this," Vulovic said.