Vucic to Russian envoy: We've no reason to trust NATO

Aleksandar Vucic informed Russia Ambassador Aleksandr Chepurin on Friday in Belgrade that "Serbia has no reason to trust KFOR or NATO in Kosovo." 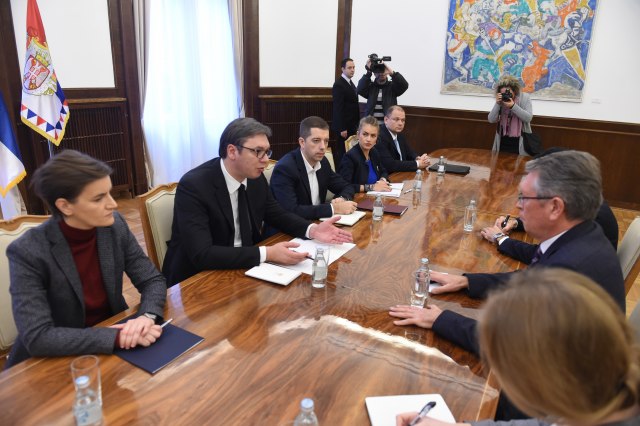 The meeting in Belgrade on Friday (Tanjug)

The president, and Prime Minister Ana Brnabic, met with the top Russian diplomat in this country on Friday morning, shortly after the Albanian police raid and arrests in the Serb North in Kosovo.

Vucic and Brnabic "thanked Ambassador Chepurin for Russia understands exactly what is happening in Kosovo and Metohija and how threatened peace and stability in the entire region are."

Vucic emphasized that this is "the strongest yet attempt to endanger the survival of Serbs in Kosovo and Metohija so far."

Vucic said that in the current situation, "Serbia will continue to act seriously and responsibly, but also that there are no more reasons to trust in the KFOR mission or NATO in Kosovo and Metohija, as it turned out that everything that was said about the movement of the Rosu units (the day before) was a fabrication."

Chepurin stressed that the Russian leadership is closely monitoring the development of the situation, as can be seen from the statement of the Ministry of Foreign Affairs of the Russian Federation, and that he believes that Serbia, as a serious state, will be able to deal with provocations and threats of confrontation in a responsible manner.

Earlier on Friday Vucic and Brnabic also held a separate meeting with the Chinese ambassador, who promised his country's support to Serbia.