After Pristina's decision to increase customs to Serbian goods by 100 percent, representatives of Serbs from Kosovo came to President Vucic. 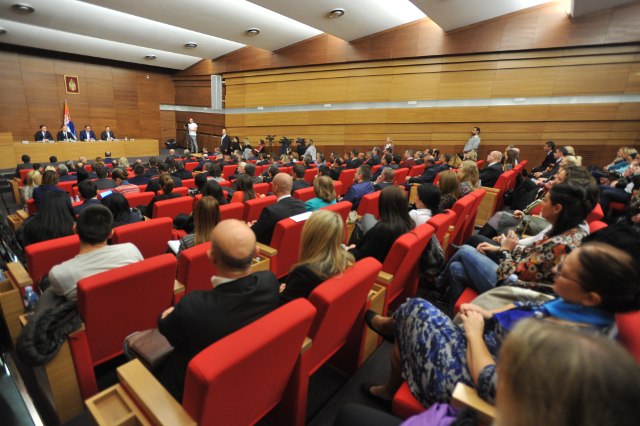 The meeting in Belgrade on Thursday (Tanjug)

During the meeting in Belgrade, he said they would not be left in the lurch.

"We have prepared something for you, to let you know what we can do as a country under limited circumstances, especially after establishing the border at Jarinje and Ranilug in 2011. I do not have to repeat that you will not be left any anyone's mercy," Vucic told the Serbs from Kosovo.

"Calling on them for peace and compromise, which is the only solution, I fear that they did not understand it, or have taken it for our weakness," Vucic said, apparently of Pristina.

He also said that he expected Pristina, which has so far lost in their intention to become a member of UNESCO and Interpol, to come to its senses and make itself more rational - but instead, "they seem to have lost their head and now, at the price of escalation and conflict, they are trying to arrive at a result."

"For your sake and ours, and the whole of Serbia, we have to keep the peace. They will try to drag us into conflicts and provocations, and that's why you have to be careful. We should stick together and fight with all the peaceful and shared means against that," he said, and added: "I believe that they will not even think to start using violence and move to be killing our people, because we will not allow them to do so."

Vucic told the meeting that the movements of Albanian troops from the Belvedere and Vrelo bases toward the (Serb) north of the province have been observed.

"Beyond this there are two possible intentions. They again took the speedboat that Thaci used to drive to Lake Gazivode, and in that sense, they could be starting to control the lake, flex their muscles, or control the so-called green passage and prevent the entry of goods from Serbia to Kosovo and Metohija," said Vucic, adding that this news was the reason he was somewhat late for the the meeting.

"We received information that KFOR was ready to stop somebody's madness, I thank them for it, if it's true," Vucic said.

"We will monitor the situation also here," he added, and inform you if there is a change in the field," the president said.

Responding to Ramush Haradinaj's claim that the taxes will not be reduced "until Serbia recognizes Kosovo," Vucic said that Serbia will not recognize Kosovo.

In 2008, ethnic Albanians in this province unilaterally declared Independence, but Serbia considers it a violation of its territorial integrity and sovereignty.

Such Haradinaj's stance puts us in a horrible position, Vucic said, but also noted that it speaks there are "other big powers standing behind Pristina's moves, that are playing dumb - because Haradinaj didn't come up with this on his own."

"Some of you know him well," Vucic said, addressing the meeting with Serbs from Kosovo," and you know he didn't come up with this - 'either we will bring down the government in Belgrade or they'll have to recognize us.' That didn't come out of his head. He read that out, lucky that he was careless enough to read it from a paper - (to) make it public as soon as possible," the president said, and added: "We must prepare for a long and hard battle, because we will not recognize independence (of Kosovo) to him."

Vucic also commented on incidents in Kosovo where Serbian goods have been publicly burned on bonfires as "the worst kind of Nazism."