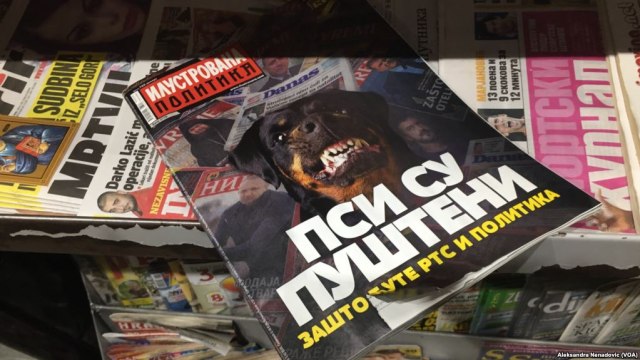 After the front page in the weekly Ilustrovana Politika "The Hounds Have Been Released," and the offensive mention of US Ambassador in Belgrade Kyle Scott, this weekly has taken Ljiljana Smajlovic, a journalist, in its sights, while sanctions by the authorities are missing now, as had been the case the last week.

Politicians have, of course, reacted to the writing of Illustrated Politika, but it seems that for the moment nobody will be held respnsible for hate speech. Both Smajlovicka and Veran Matic, the president of the Commission Investigating Murders of Journalists in Serbia, see this as pressure ahead of the verdict for the murder of Slavko Curuvija, a journalist who was killed in 1999, a case that has not been fully shed light on to date.

Smajlovic, a journalist and a former editor-in-chief of the Politika daily, says that she feels "unpleasant and insecure":

"I do not understand how this is all happening again. This resembles that period before the murder of Slavko Curuvija. Those who write this are aware of the symbolism, and someone is consciously playing on it," Smajlovic says, adding that her situation ca not be compared to that of Curuvija.

The Association of Journalists of Serbia (UNS) condemned Goran Kozic's claim stated in the Ilustrovana Politika that it was precisely thanks to the influence of journalist Smajlovic on Washington Post that the (NATO) bombing of Serbia in 1999 lasted much longer than planned.

"UNS recalls that Slavko Curuvija was killed after being falsely accused in Politika Ekspres of asking for the bombing of Serbia in 1999, and that after almost 20 years Goran Kozic in the weekly Ilustrovana Politika, owned by the state, falsely, without evidence, accuses Smajlovic for continued bombing of the SRJ and points out that there is no evidence for the allegations that Curuvija was killed by the regime of the time," a statement said.

This journalist association estimated that the claims were only a step toward the conclusion that Curuvija and Smajlovic deserved a violent death.

Veran Matic, chairman of the commission, also sees the writings in Ilustrova Politika as "preparing the terrain for the acquittals for the murder of Curuvija".

"I think this is an absolute continuation of that text from the Ekspres before the murder of Curuvija. Also, I think this is an attack on Smajilovic, but not only on her. These are strongly concentrated attacks not on journalists and on entire news desks, "says Matic.

The trial of four former members of the State Security, charged with participation in the murder of the owner of the faily Telegraf, Slavko Curuvija, entered the final phase in October.

The four accused in the Curuvija muder

The former Chief of State Security Radomir Markovic, then head of Belgrade's DB Center Milan Radonjic, and Ratko Romic, are charged with the murder of Curuvija, as well as Miroslav Kurak who is being tried in absentia after his escape. Markovic is serving a prison sentence of 40 years, while Kurak is on the run and an international arrest warrant has been issued.

Matic also states that "it is a fact that the two indictees were released to be free while defending themselves, and in that way affect witnesses."

Comparing newspaper articles from the 1990s and those from Ilustrovana today can lead to the conclusion that the judiciary, together with the media, is in a very difficult position. And in the opinion of journalists and media associations, much that is happening today seems to be a return to open intimidation and threats to security, both of journalists and of those who work in the judiciary.

"This can be interpreted to mean that someone wants to leave an impression on the judges. I hope this is just a farce and that they are trying to protect someone," says Smajlovic.