"Thaci is free to chase Putin all he likes"

"We are not thrilled with every photo - but everyone has their own policies and positions, just as Serbia does." 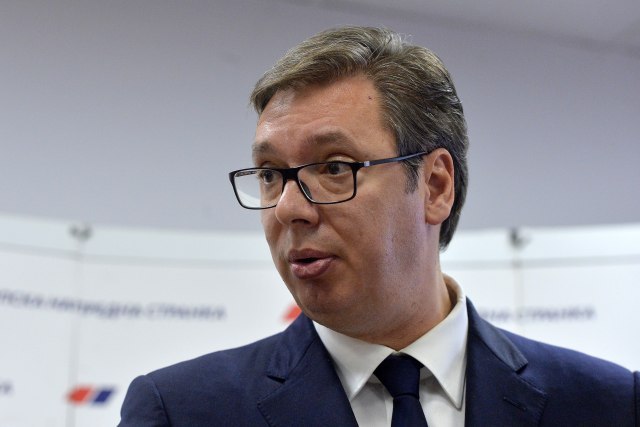 This is what President Aleksandar Vucic said on Tuesday regarding the photos Kosovo President Hashim Thaci posted the day before of himself with Russian leader Vladimir Putin.

"Thaci is free to chase Putin all he likes, but he will not get the support for anything that Serbia disagrees with," the president said during a press conference, and added that "at this moment we are very far from alignment (of positions)."

He also stated that Russia has its interests, as does the US.

"The fact I see (US President Donald) Trump does not mean that the US will not change its opinion about Kosovo, as it will not be changed by Trump saying (in Paris) that Serbs are a great people," noted Vucic.

He is confident that Russia, too, will not change its position (of supporting Serbia on the Kosovo issue) and will continue to stand with Serbia, as it has done thus far.

Vucic said he did not know when Thaci's photos with Putin were taken in Paris, where a ceremony was held on Sunday marking 100 years since the end of the First World War - but added that he "knows how Putin reacted during the ceremony itself the when he realized with whom was shaking hands."

As for Thaci's reports about his conversation with the Russian president, Vucic said:

"It's not my business. It's a question for Russia and for Pristina. It's not up to us to keep an eye on what a great power like Russia is doing, it's not up to me to moan, either."

"I do not think it's always easy for Putin. Despite the fact that the EU de facto supports Kosovo's independence, we are on the European path. It is not easy for him. We are not thrilled with every photo. In politics there is no love, only interests," said Vucic.

Russia, he pointed out, is our friend, we have good relations with Russia and they will get even better.

He added that President Putin would come to Serbia in January, and would never go to Pristina.

In December, he continued, French President Emmanuel Macron is coming to Serbia, who will also not go to Pristina.

Vucic then pointed out that China's president and PM and the Israeli PM are also coming to Serbia, as is the Turkish president, "and other people from different parts of the world."

"They ask me how I'm able to know both Orban and Soros. I can, that's the greatest commendation to the Serbian policy, because it managed to get out the most in different parts of the world," the president concluded.