Serbia grateful to Greece for not changing stance on Kosovo 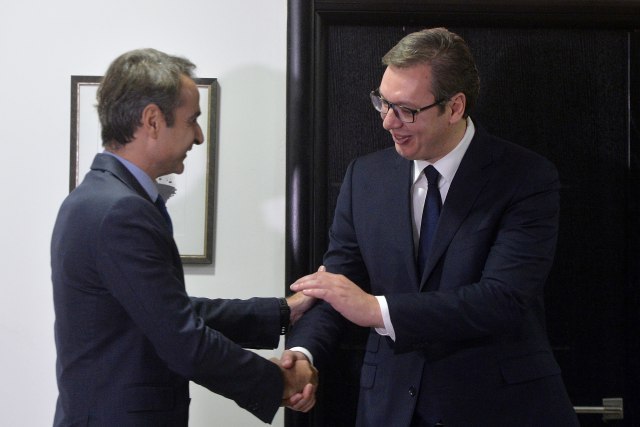 SNS officials Jadranka Joksimovic, Marko Djuric and Vladimir Orlic were also present at the meeting in the premises of the SNS in Belgrade.

After the meeting, Vucic and Mitsotakis will hold a joint press conference.

Vucic thanked Mitsotakis for his support and for the confirmation that Greece's position on the issue of Kosovo and Metohija will not change.

Greece does not recognize the unilateral proclamation of independence made by ethnic Albanians in 2008.

Vucic also said during the news conference he informed the New Democracy about Pristina's decision to raise taxes on importing goods from Serbia.

Vucic thanked today Greece and New Democracy for the support given to Serbia in the process of European integration, and especially thanked Prime Minister Alexis Tsipras for his stance that Greece will not change its position in relation to the Kosovo issue.

Vucic spoke with his Greek guest about the cooperation between the two countries and the two parties that are both members of the EPP bloc.

He said he pleased with Mitsotakis "to do as much possible to make Serbia even more and better seen in European circles."

"The Serbian and the Greek people are bound by genuine friendship and emotional connection," Vucic emphasized, but also underlined that it is necessary and to make these relations "as concrete as possible" in infrastructure projects, such as the Belgrade-Thessaloniki railway, investments, and other forms of economic cooperation.