Ivica Dacic said on Sunday that it is not enough only to be heroes in the war, "but we must also conduct a smart policy in peace." 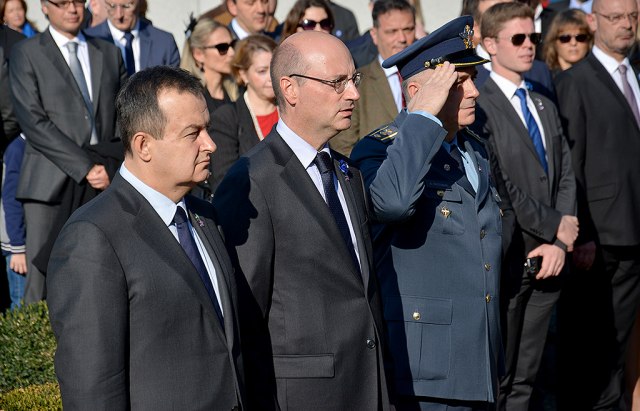 The purpose would be "not to lose in peace all that we won in wars," Dacic is quoted by the Serbian government.

The first deputy PM and foreign minister, who attended the ceremony at the French Military Cemetery in Belgrade marking the 100th anniversary of the signing of the armistice that ended the First World War, organized by the embassy of France in Serbia, pointed out after the laying of the wreaths that it is important to send today a message of peace, reconciliation and the common future of European nations.

He referred to the great victory of the Allies, including Serbia, in the First World War, but also pointed out that that was a great suffering for Serbia, which lost a third of its population in that war.

We must learn the lesson that it is important to conduct a smart policy in peace, Dacic concluded.

Deputy Prime Minister and Minister of the Interior Nebojsa Stefanovic led today, on behalf of the Serbian government, a state ceremony of laying wreaths and paying tribute on the occasion of the Armistice Day in the First World War.

The state ceremony at the Memorial Ossuary to the Defenders of Belgrade began with the playing of the Serbian national anthem, followed by a minute of silence to pay homage to the fallen victims.

Stefanovic said that with today's celebration of the 100th anniversary of the armistice and the great victory we want to express deepest respect for hundreds of thousands of warriors and civilians who lost their lives for peace and freedom.

This is an opportunity to recall not only their heroic accomplishments, but also the price paid by our ancestors to win freedom for themselves and their country, the Deputy Prime Minister said.

Just as Serbia gave an immeasurable sacrifice in the fight for freedom 100 years ago, today it is making enormous efforts to be a guarantor of peace and stability in the Balkans, the Deputy Prime Minister said.

Today, just as 100 years ago, Serbia is determined to be a responsible and well-organised society that strengthens its position in the family of European nations.