Intl. community "to be made aware of conduct of Pristina"

Prime Minister Ana Brnabic requested at Thursday's session of the government that a letter be sent to the heads of governments of "all countries in the world." 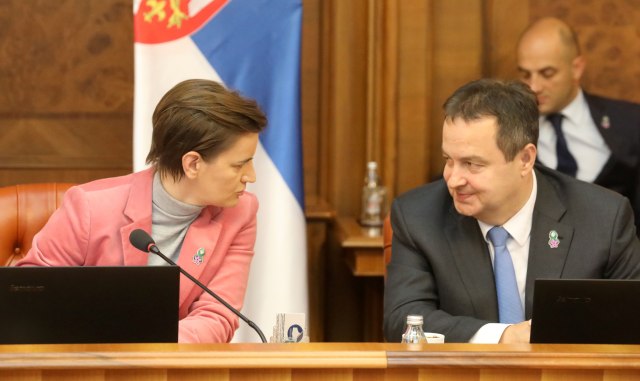 PM Brnabic (L) is seen with her first deputy, and Foreign Minister Ivica Dacic during the cabinet session on Thursday (Tanjug)

The letter's purpose would be to "warn them of the endangering regional peace and stability by Pristina," the Serbian government announced.

The letter will point out the decisions and behaviour of the provisional institutions of self-government in Pristina, which completely and continuously violate all the agreements reached, regional initiatives and international agreements, and even the documents that the provisional institutions themselves adopted, such as the Constitution of the so-called "Republic of Kosovo".

By this letter, the government of the Republic of Serbia wants to draw attention and warn individual countries of endangering regional peace and stability by Pristina, as well as to intentionally and directly undermine the atmosphere of dialogue at a time when Serbia is making the maximum effort to intensify it, with the aim of long-term peace, stability and prosperity for all inhabitants of this part of Europe.

Brnabic stressed the need for communication with all partners around the world to be strengthened so that everyone would be aware of the complexity of the situation in which Serbia is conducting the dialogue, which would in the most direct way give full support to the efforts of the President Aleksandar Vucic, and provide as much security as possible for our people in Kosovo and Metohija.