The front page of the Ilustrovana Politika magazine has caused a public storm, while condemnations arrive from journalist associations, and from the president. 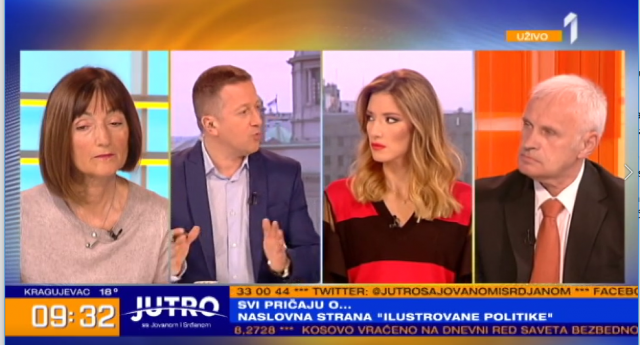 The front page, that features an image of a growling dog and the heading, "The Hounds Are Unleashed," has caused President Vucic's media adviser Suzana Vasiljevic to resign from the supervisory board of Politika AD, the publisher of the weekly.

This was also the topic on Prva TV's morning show, with guests including Journalist Association of Serbia (UNS) Court of Honor Chairwoman Ljiljana Smajlovic, and Djordje Martic - the author of the controversial article promoted on the front page of Ilustrovana Politika.

Journalist associations, meanwhile, accuse Martic of "drawing target marks on reporters," and recall that as editor of Politika Ekspres daily he wrote about journalist and publisher Slavko Curuvija, shortly before be was shot dead in 1999.

"(Late journalist) Aleksandar Tijnanic said, 'if Djindjic survives, Serbia won't'. After that they killed Zoran, while Tijanic is about to get a street named after him. I'm chased out of my profession, my life is destroyed, my kids are persecuted. This is not about a principle, but about a stance toward one man and what he represented," Martic stressed.

According to Ljiljana Smajlovic, the controversy is in Martic being "a recidivist."

"People called me and said, Martic is once again writing in that threatening and gloating tone against journalists. It's important also because this is a state-owned media, it's important that Vucic has been heard. When someone bylines a text then they have some integrity. It's important who wrote it and where it was published. A conversation cannot be had about this text without that. Martic's thesis is interesting, that Aleksandar Vucic perhaps likes the text, but the front page is contentious. Vucic must respond to that, resolve this dilemma," Smajlovic stressed.

Smajlovic said that "accusing her and Verena Matic of proclaiming Serbia to be Saudi Arbia, is journalistic fraud, as had been done with Curuvija."

"Martic accused Curuvija of being a national traitor at the time of the NATO bombing when such an accusation was very dangerous. This line of thinking, 'we published it, he can deny it', does not exist in any school of journalism, it violates all the rules of journalism and elementary humanness. People cannot be accused without evidence. The Khashoggi and Curuvija murders are very similar," Smajlović said.

But for Djordje Martic, this is not true.

"The state that killed Khashoggi is a great friend of America, and the state charged with killing Curuvija is not a friend of the United States. That's the big difference," said Martic.

"Veran Matic is falsifies the statement of the president of Serbia and saying that the president condemned the text by Djordje Martic, but this is nowhere to be found in the statement of Vucic. With that falsified statement, he (Matic) brazenly and arrogantly seeks to a security check of the journalists. What does that look like," Martic asked.