PM pledges Serbia will "always be loyal friend to Belarus" 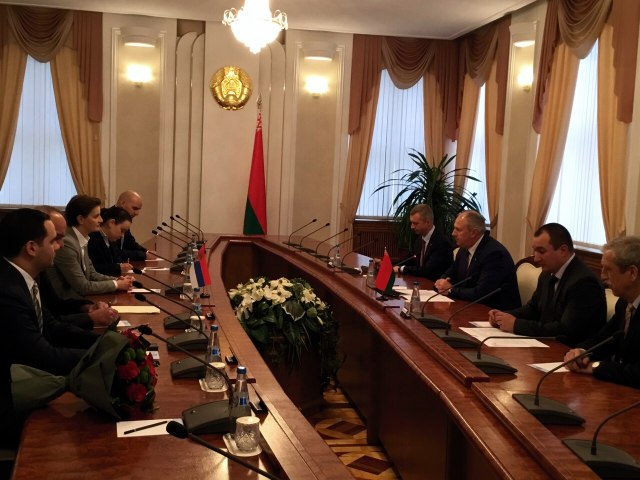 At a bilateral meeting with President Lukashenko, it was concluded that relations between Serbia and Belarus are friendly and that there are no outstanding issues, the Serbian government announced in a press release.

The prime minister handed over a letter by President of the Republic of Serbia Aleksandar Vucic to President Lukashenko, in which the Serbian President thanked him for the friendly attitude of Belarus towards Serbia, as well as for respect and understanding in resolving the Kosovo issue.

The Belarus support is priceless in preserving the territorial integrity and sovereignty of Serbia, it is stated, inter alia, in the letter of President Vucic, who repeated the invitation to the President of Belarus to visit Serbia.

Prime Minister Brnabic expressed gratitude on behalf of all citizens of Serbia, as well as in her personal name for the support given by Belarus to our country.

In a meeting with Belarusian Prime Minister Syarhey Rumas, Brnabic thanked Belarus for its support in resolving the issue of Kosovo and Metohija.

Support is even more important at the moment when a covert dialogue between Belgrade and Pristina is being conducted, the resolution of which is in our interest, and in which Serbia faces enormous challenges. Your principled support will never be forgotten by our people, Brnabic pointed out.

She added that Serbia will always be a loyal friend to Belarus and invited the Belarusian prime minister to visit Serbia.

The prime ministers concluded that the economic cooperation of the two countries, whose trade exchange is still below €100 million, can be further improved.

The officials discussed cooperation in the fields of energy, agriculture, construction and auto industry.

Brnabic and Rumas particularly expressed their desire for cooperation in the IT sector.

Serbia is a key country in the Balkans for Belarus, and we will do our best to further develop this cooperation, the Prime Minister of Belarus said.