Aleksandar Vucic has reportedly said that he "has information about the date when the Kosovo army will be formed." 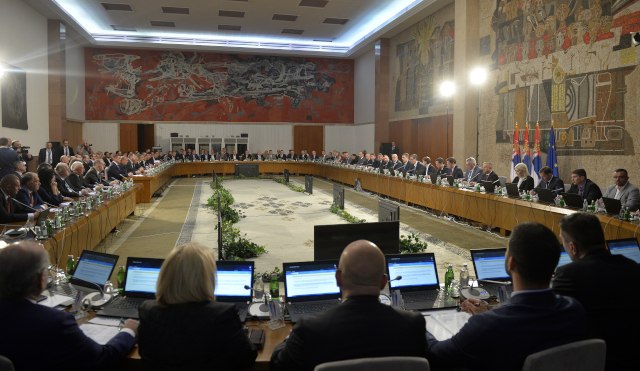 The meeting in Belgrade on Tuesday (Tanjug)

The president made the comment on Tuesday in Belgrade, during his meeting with representatives of Serbs from Kosovo and Metohija.

B92 has learned that Vucic said an army would be formed in Kosovo "on November 28, Albanian Flag Day."

Later in the day, Vucic addressed a news conference to tell reporters that "a very difficult month is ahead of us," and that as the president of the Republic, he felt "concerned."

He spoke about the fact that (ethnic) Albanians are trying to "forcefully seize the electricity transmission network leading from Novi Pazar (in southwestern parts of central Serbia) to the north of Kosovo."

"They are unlawfully trying to do this and accuse our EMS (Serbia's electricity transmission company) of preventing the free flow of electricity. And they are doing it by forcing Albanians to steal our electricity and saying that we are not able to control it... We do not complain about it just to be able to maintain our transmission network," he said, and added:

"They want to kick us out and say that the main operator is the Albanian KOSTT. They are committing legal violence, I will write a letter and tell the Germans and the French about it. It would be a scandal of great proportions. The agreement was that there should be two companies that will be established by the Community of Serb Municipalities (ZSO) - but they (Albanians) want to take over the Valac and the Gazivode systems and are saying that it is the property of an independent state of Kosovo."

He then confirmed that there is a plan to, on November 28, declare "the Army of Kosovo."

"This is contrary to both their constitution and the spirit of all agreements and (UN Security Council) Resolution 1244, and the Kumanovo and the Brussels agreements, and the Brussels agreement with NATO. In the meantime, we will have Interpol, too, (i.e., Pristina's bid to join the organization that Serbia is opposed to), and a discussion in the Pristina parliament. They want to limit the scope of their delegation's work, after which the question of the meaning of the dialogue will be raised," the president said.

"When I say all this, it's clear to you how difficult our situation is. They are completely united, all Albanians, all parties. I do not want my party to be united with the worst in Serbia - the unity of the people is necessary, we will need the strength of the people now more than ever," Vucic said.