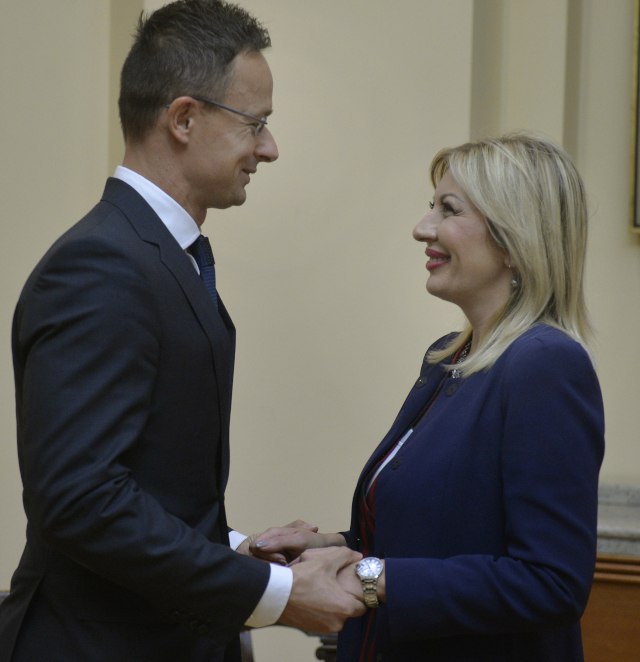 Szijjarto and Joksimovic are seen in Belgrade on Thursday (Tanjug)

Minister for European Integration Jadranka Joksimovic informed Minister of Foreign Affairs and Trade of Hungary Peter Szijjart about this on Thursday in Belgrade, the Serbian government announced.

At a press conference in the government of Serbia, Joksimovic expressed gratitude to Szijjarto for the support that Hungary provides to Serbia on its European path, and stressed that it is realistic to expect Serbia to open three or four chapters by the end of the year.

She pointed out that Hungary backs the EU enlargement policy and added that Hungary in this sense also provides technical support in the process of European integration through the experts delegating to our negotiating team.

Serbia and Hungary also have good cross-border cooperation related to projects that are of interest to border municipalities, she said.

The minister conveyed her gratitude to Hungary and Szijjarto for the support they have given to Serbia for years on the European path, and stressed that Serbia knows that it appreciates and will do everything to make the status of Hungarian and all other national minorities in Serbia even better, even though it is now above European standards.

He explained that there are several reasons for the support of Hungary, one of them being of economic nature, while another is of a security character because Hungary considers that Serbia has a key role in security in the Western Balkans, so that if Serbia has a stable and rapid growth and development, then this applies to the entire region.