Kosovo is Serbia's "biggest and only EU problem" - Vucic

Kosovo is the biggest and the only problem of Serbia on the path toward EU (membership), says President Aleksandar Vucic. 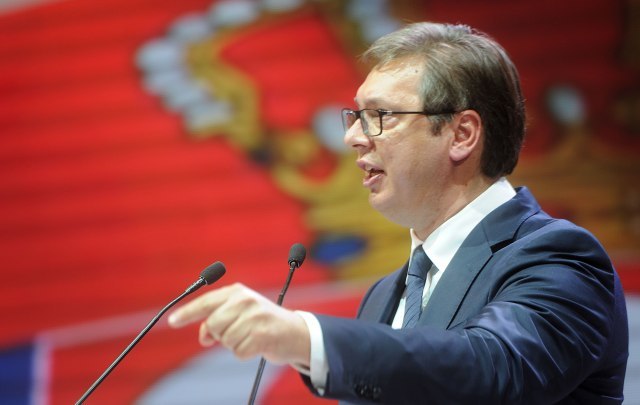 Asked to comment EU Commissioner Johannes Hahn saying that Kosovo is "not the only problem of Serbia on its path to the EU," Vucic "explained that Hahn was referring to reforms and the rule of law."

But, added the president, Serbia's biggest problem on the EU path is that of Kosovo.

EU leaders "do not want to say that because they know that they get negative points when they only talk about Kosovo," Vucic added.

"We keep are monitoring carefully everything that is happening in the EU, we are on the European path because we want to have a democratic society and to be a well-ordered country, but our biggest problem is Kosovo and Metohija," Vucic said.

"We need to be a democratic society and we should regulate it, and I am not running away from that - but to be clear, people must know that our economy can only move forward if we have peace and stability. There are serious incidents in Kosovo, but bearing in mind that other than the murder of (Oliver) Ivanovic, we have not had such grace events in KiM (Kosovo and Metohija) in the last few years, that too has been painstakingly guarded and we fought for that in Brussels over the past years," Vucic said.

"These conversations (in Brussels) are tough, people should realize that the Albanians are getting ever more nervous, especially if they don't (manage to) join Interpol, and if they do, they will be celebrating and not even wanting any kind of compromise. On the other hand, you have an international community that says, 'don't bring up borders', yet we want to," he said.

According to Vucic, Serbia "wants a compromise" with the Kosovo Albanians, but it is "now clear that it will be almost impossible to achieve it, because of the political atmosphere in central Serbia and Kosovo."

He added that "the foreign factor obviously does not want Serbia and Kosovo to reach an agreement" and noted that it will be "increasingly difficult" to preserve stability in Kosovo.