Foreign Minister Ivica Dacic sasay Serbia will recognize Kosovo and allow to have the UN chair "when pigs fly." 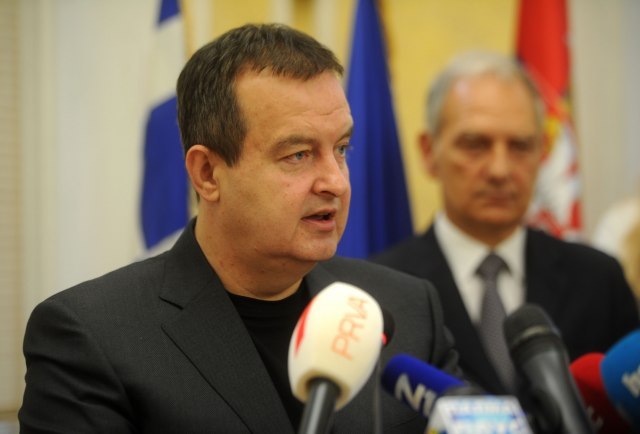 Dacic also stressed that Pristina authorities are sending "very different messages that have nothing to do with reality" on a daily basis.

Compromise should be sought on the issue of Kosovo and Metohija, he continued, and described Hashim Thaci' statement regarding a merger of (Kosovo) with Presevo by saying that Thaci "must say something, because he is under attack from all sides."

"They will not talk about correction (of the border), but they want Presevo ​​and Bujanovac (two municipalities in the central part of southern Serbia)? They're very clever. And you know when that will happen, when Kosovo will join the UN, when we'll recognize them as a state? When pigs fly," Dacic told reporters while visiting the embassy of Greece in Belgrade.

Those who have recognized Kosovo and made arrangements with Martti Ahtisaari, he continued, referring to a former UN envoy, are now astonished by the fact that borders are being talked about - and they were the first to declare Kosovo a state (in 2008) and violate Serbia's integrity, Dacic said.

That means, the minister continued, that they do not want anything to be chipped off from what they call the "Kosovo state."

"We've come up with some proposals, and since they are against the correction of the borders, what is their proposal to us?" Dacic asked, adding that "the other side" that does not want "corrections" wants Serbia to recognize Kosovo, and to get the Community of Serb Municipalities, the ZSO (Pristina's obligation under the 2013 Brussels agreement) for the north of Kosovo. "I say, forget it, that won't happen," Dacic concluded.