First Deputy PM and Foreign Minister Ivica Dacic says Kosovo Albanians and those who support them are the biggest problem for resolving the Kosovo issue. 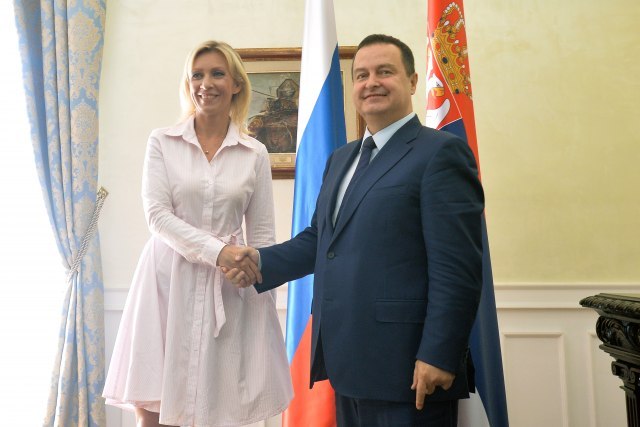 The Serbian official also pointed out that Belgrade will continue the fight for territorial integrity and sovereignty.

"I have always spoken about the need to separate the Serb and the Albanian parts of Kosovo. That is my personal opinion... I cannot comment on what Serbian President Aleksandar Vucic means by delimitation, but I want to say - let's not talk about it as if that issue is already on the table. It's a reflection of our desire to reach a compromise," Dacic said, speaking on Friday during a joint news conference in Belgrade with Russian Foreign Ministry spokeswoman Maria Zakharova.

He added that "there are probably many ideas about how that could happen."

"But there is a principled thing, Pristina is making things - if there was somebody with weaker nerves on our side they would say, 'I've nothing to talk to you about'... They want Bujanovac and Presevo ​​to belong to Kosovo and this to them is a compromise... well let's not be.. let's not play the fools in the dialogue," Dacic said.

"What the president said is a practical attempt to reach a compromise solution," Dacic continued, and added: "Whether and when, we'll see, he himself says, and he also told me that chances are small that it will be reached. What the agreement means, that is yet to be discussed."