"Milosevic wrote letter to Lavrov one day before his death"

One of Serbia's best-known and most respected lawyers, Zdenko Tomanovic, has spoken for the new issue of the magazine Nedeljnik, out this Thursday. 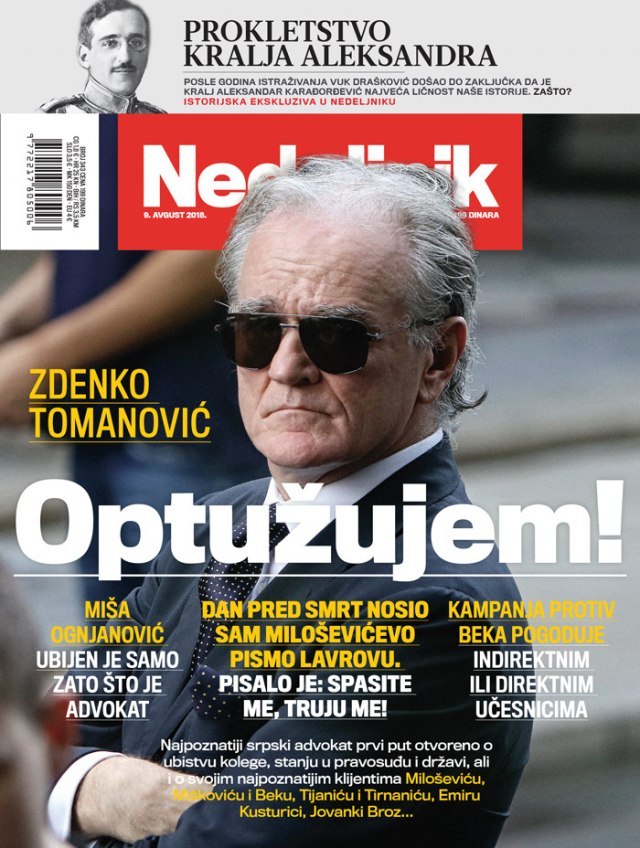 The front page of Nedeljnik, featuring Tomanovic's photograph and the headline, 'I accuse!'

Tomanovic talked about his experiences while working as Slobodan Milosevic's legal adviser in The Hague. In the interview, the lawyer revealed how their last encounter went.

"The day before he was found dead in a cell, Milosevic asked me to come a little earlier to him in prison, and to take his hand-written letter to the Russian embassy, with the request that it be handed to Russian Minister Sergei Lavrov. In the letter, he complained that he was being poisoned in the Hague Tribunal and asked Russia to protect him and save him. A day later, Milosevic was found dead," Tomanovic - who was also the only citizen of Serbia who saw Milosevic dead in his cell - told the magazine.

Tomanovic was clearly disappointed and resigned: "Misa was killed only because he was a lawyer. And at this moment, this is the only significant thing. Unfortunately, our political elites and their media executioners immediately saw the opportunity to criminalize a lawyer. This creates an atmosphere that relativizes the importance of this murder."

To kill a lawyer just because he was doing his job "goes beyond the strength of all the numbers that we are being offered," he said. "Equality and security of every citizen is not ensured by transferring of responsibility to some past times."

And then he warned: "Lawyers must unite, because that's in the interest of Serbian citizens."

In the wide-ranging interview, Tomanovic also spoke about the judiciary in Serbia and all of its defects, the influence of politics and the media on the law, the defense of Milosevic, his socializing with Aleksandar Tijanic and Bogdan Tirnanic, and his clients Miroslav Miskovic, Milan Beko, and Emir Kusturica.