Bilateral relations between Serbia and Egypt "on rise" 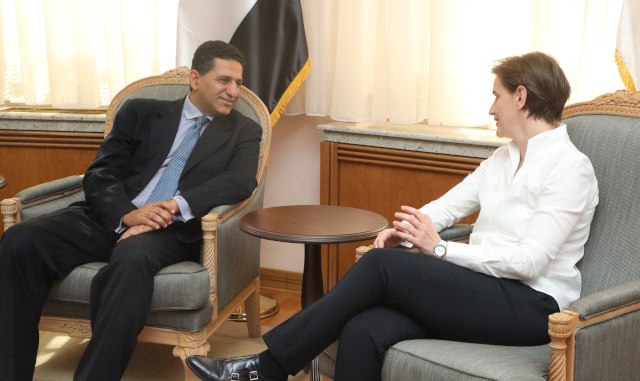 According to the Serbian government, Brnabic said during the meeting that "our peoples have traditionally friendly relations that represent a good basis for improving cooperation at all levels, including faster linking economies of the two countries."

Brnabic pointed out that Serbia strongly appreciates Egypt's support at the international level, adding that the two countries share the same responsibility for maintaining the stability of their regions.
Aljowaily estimated that bilateral relations between Serbia and Egypt are on the rise with intense dialogue at a high level, but that economic cooperation does not adequately follow the development of political relations between the two countries.

The officials agreed that more concrete progress in this area could be expected after the meeting of the Mid-Term Economic Cooperation Committee, which should be held as soon as possible.

The ambassador stated that his country is interested in enhancing cooperation in the field of culture, recalling that "Days of Egpyt in Serbia" were held in Belgrade last month to mark 110 years after the establishment of diplomatic relations between the two countries and as a result of good cooperation with the relevant institutions in Serbia.