Main obstacle to Kosovo solution is no secret, says Dacic

Pristina's maximalist goals, which, along with recognition, wants Presevo ​​and Bujanovac, are the main obstacles to resolving the Kosovo problem. 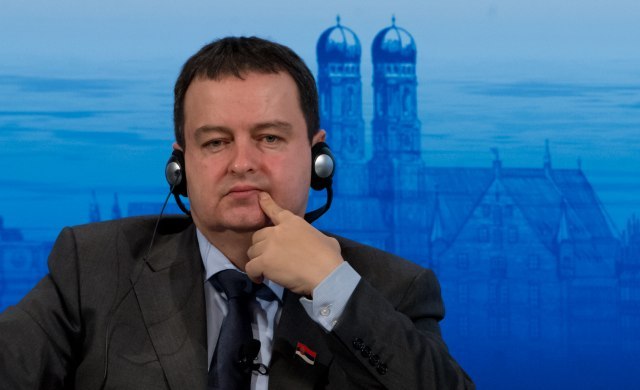 This has been stated by Minister of Foreign Affairs of Serbia Ivica Dacic.

"It's no secret that the main obstacle to reaching an agreement is Pristina's resolve to come up with maximalist goals in the talks. They do not want a compromise but us recognizing (Kosovo's) independence, but also to receive another thing - as they call it, eastern Kosovo - Presevo and Bujanovac," Dacic told RTS, referring to two municipalities in the southern part of central Serbia.

He said it was at this time "uncertain to say" when a framework agreement could be reached that would mark the solution on which relations with Pristina would be based.

Dacic said that Serbia must be realistic "and see what the perspective is in international relations" - because Serbia "does not live a life based on myths."

Responding to those who say the time is not right to be resolving the Kosovo issue, Dacic added that he "does not know when the time could come that would make Serbs once again be a majority in Urosevac, Djakovica and Kacanik."

"Personally, I think that partition is the solution, I am have been talking about this for ten years, Dobrica Cosic spoke about it and yet he was not a traitor, as did Zoran Djindjic. Some say that he (Djindjic) in that way drew the anger onto himself that ended with the attack," Dacic said, apparently referring to the assassination of Djindjic in 2003.

The minister added that "there are those who would like someone else to solve it, attack the north of Kosovo and expel the Serbs and solve the Kosovo problem in this way."

He invited anyone who has a different compromise solution to put it forward, and added that it was "necessary to ask citizens whether a whole independent Kosovo is better than something else."

Asked what Serbia intends to do now that another deadline to form the Community of Serb Municipalities (ZSO) in Kosovo has passed, Dacic said that "only the blind can't see that this is about creating a Greater Albania."

"The Albanians are avoiding forming the ZSO, they think that's a lasting solution. It's ridiculous and we do not accept it. During the (Kosovo) dialogue, nobody ever mentioned that we would recognize the independence and allow them to become members of the UN," Dacic said, and added that in the coming weeks, "the struggle for withdrawals of recognitions of Kosovo will continue."

He also assessed that "some people in Serbia, but also in the region" are "dissatisfied because Serbia has strengthened its international position."

"In Croatia, the main problem is that someone is talking about (Operation) Storm. They expect that they will be the ones to decide who will be the president of Serbia and the minister of foreign affairs, (who) would praise Storm," Dacic said, and recalled that in 1971 there were about 626,000 ethnic Serbs in Croatia, while there are about 186,000 today.

With diplomats one speaks diplomatically, the minister continued - "while with criminals, with whom one cannot act diplomatically, one must go for the jugular in order to reveal the truth."

"Not in order to exact revenge, but because we must not allow the victims to be forgotten," said Dacic.